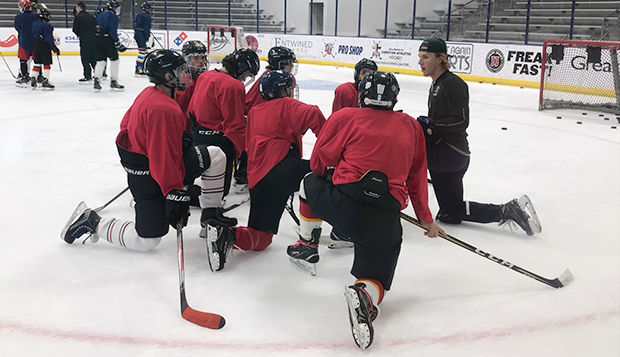 Liberty University's Summer Hockey Camps are in full swing at the LaHaye Ice Center with the second of four sessions — including nearly 50 Bantam (13-14 age group) and more than 25 U16 players from around the region — starting Sunday and wrapping up Tuesday with staggered schedules.

Though shortened to three days and limited to day camps rather than overnight events due to COVID-19, the on-ice activity is essentially the same and the intensity of workouts and spirit of competition as high as ever. On Monday, U16 players rotated between four stations for drills that tested their stickhandling, skating, shooting, and defensive skills, with Flames DI rising senior forward Cole Gammer running one corner where campers checked opposing players into the boards.

"(DII men's Head Coach) Ben Hughes, who's running the on-ice sessions, has it set up to where it's good flow, with power skating first and skills and some games at the end, so we're encompassing everything," said DII forward Josh Wagner, a rising sophomore from Raleigh, N.C. "We make sure it's a good pace and make sure that they're learning and gaining skills as they go."

"It's pretty lively with these guys," added Flames' DIII men's Head Coach Josh Graham, who is working with Hughes and DI men's Assistant Coach Jonathan Chung. "I've been doing camps for a lot of years and it's good to coach youth. We're thankful we can still have the camps even with the modifications we've had to make (due to COVID-19)."

Graham coached the U11-12 boys Mites, Squirts, and Peewees last weekend and will assist in next Sunday's through Tuesday's U18 boys ID camp and the July 12-14 girls camp, directed by DI women's Head Coach Chris Lowes and DII women's Head Coach Rena Leone.

He is gearing up for his first season at the DIII helm after spending seven seasons as a DI women's assistant coach at Liberty and the camps are an excellent way for him to refine his coaching techniques for kids just learning the game up to those interested in taking the next step to play Juniors or collegiate hockey.

"It gives you a chance to teach the technical skills, so when they get to the college level, you can focus on the tactical," Graham said. "It's good to break it down at this level, working on skating, shooting, and passing skills, and take it into the college game with my guys and do the same thing."

Club Sports Director of Strength & Conditioning Chris Kerr and his staff have helped with off-ice workouts for the young skaters.

"They've led good workouts to get them in shape and help to show them what they need to do when they get home to be better athletes," Wagner said.

Besides sharpening their games on the ice, players are seeing a slice of life at Liberty as well as being discipled by coaches, Club Sports staff, and counselors, including DII men's Assistant Coach Matt Cruickshank, former graduate defenseman Drew Crilly, rising senior forward Blake Flanders, and DI men's defenseman Basil Reynolds, who graduated in May.

"All the coaches love the Lord and they're more than happy to share," said Wagner, who previously worked FCA Hockey camps in Minnesota. "I like helping little kids and as coaches, we absolutely love to chat with them if they have any questions about spiritual things."

Club Sports Assistant Director of Business Operations Reese Braband has led afternoon chapel services for all three groups this week leading up to afternoon scrimmages back on the ice. 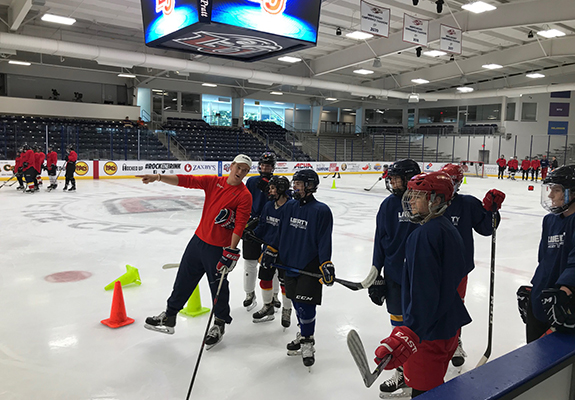