Men's volleyball moving from hardcourts to sand for summer 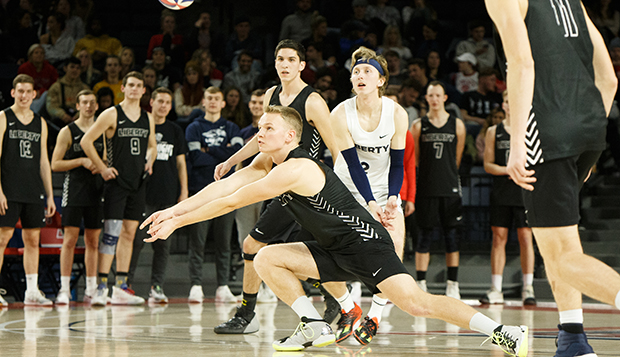 A new coach and extremely young lineup did not stop Liberty's men's volleyball team from carrying the momentum from its first NCVF National Championship Final Four appearance in 2019 into the 2020 season. Ranked as high as No. 3 in the first NCVF polls, the Flames got out to a hot start to their spring campaign before it was derailed by COVID-19.

After beating Maryland in the spring-season-opening "Midnight Mayhem" matchup played Jan. 25 at the Vines Center, the Flames finished runner-up at the Hoosier-Illini Classic in Bloomington, Ind.

"That is probably the toughest tournament that we play all year that's not a conference tournament," first-year Head Coach Kaleb VanDePerre said. "We really showed what we could do with a young team. We threw in a new offense in the middle of that tournament and it was working really, really well. We were clicking on all cylinders … feeling like a top-five ranked team in the country … before everything got canceled."

He said the news was a setback for the team, but not as devastating as for others with more upperclassmen.

"As a coaching staff, we were most disappointed that a young team didn't get to battle in the East Coast Championships and (ECVA) Conference Championships and (NCVF) National Championships," VanDePerre said. "Fortunately, we return everybody. There's a lot of teams who lost seniors who didn't get a great closure to their season, but we were really young. Now we've got a bunch of juniors and one or two seniors this next year and we are excited."

VanDePerre, who also serves as Liberty's beach volleyball head coach, has encouraged his players to refine their skills outdoors in the offseason.

"We're trying to get in the sand as much as we can and get some doubles in over the summer," he said. "Guys are excited to be competing again and that's awesome. It's kind of stretching them. A lot of guys haven't been outside a lot, so they're not used to the elements. Having only two people on the court, our ball control and hopefully our IQ is going to get a lot better."

Players are also staying fit through offseason workouts designed by Club Sports strength & conditioning coach Ross Garner so that when they return to campus in August, they will be ready to hit the hardcourts running.

The Flames will open their 2021 season with a "Midnight Mayhem" matchup against a yet-to-be-named opponent at the start of the spring semester in late January, which will be their debut in the new Liberty Arena, home of the Lady Flames volleyball team, which is scheduled to be completed this fall.