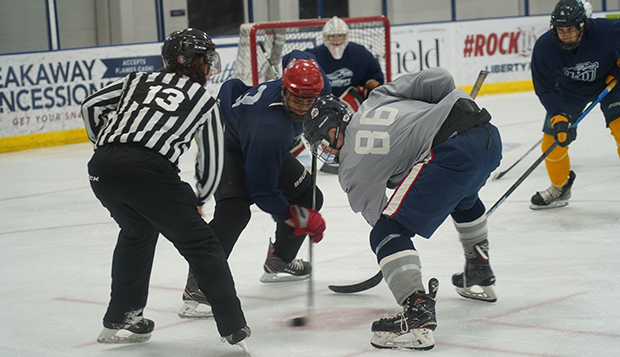 Prospective players in the highest-level group face off during Friday's 4:30 p.m. scrimmage at the LaHaye Ice Center.

The sounds of skates carving the ice, pucks caroming off the boards, and players shouting to teammates returned to the LaHaye Ice Center on Thursday and Friday as Liberty University's men's hockey program hosted its annual Flames Prospect Camp, delayed nearly two and a half months by COVID-19.

"It's been fun to have the young energy back in the building, having people around and being able to do what we do," Flames Division I Associate Head Coach Jeff Boettger said. "Even though it's not totally normal here yet, it's been super nice to have some semblance of (normalcy again)."

Phase 2 restrictions established by the Commonwealth of Virginia were followed as closely as possible to safely accommodate the incoming players from around the region, though no Canadians were able to make the trek to Lynchburg, Va., due to the border closure.

"Everybody's really been happy with the steps we have taken to make sure everything's done the right way and yet they are able to get out there and skate and play and show us kind of what they've got and how interested they are in being at Liberty," Boettger said.

The Flames' ACHA Division I, II, and III coaching staffs welcomed a talented group of prospective players ranging in age from 16-20 and divided into three groups to assess their skills and evaluate where they might best fit in plans for the coming fall season or future years.

"It has been a great weekend and a great turnout," said Liberty DII Head Coach and Club Sports Recruitment Coordinator Ben Hughes, who had 10 of his players participate in the skates and scrimmages. "Actually, talent-wise, I'd say it's maybe our best prospect camp ever.

"We're excited to get some of our recruits on campus to meet each other, meet the staff, and potentially recruit some other players and hopefully have them join our team in the fall," he added. "The best thing about prospect camp is all the coaches are involved in the evaluation process and all of the teams benefit from it," including new DIII Head Coach Josh Graham.

The event was originally scheduled to be held in conjunction with College For A Weekend (CFAW) in April, but Boettger said having it in the summer had its advantages.

"It's actually worked out really well," he said. "There are pros and cons to both. In the middle of summer, there's not a lot of traffic on campus, so it's a little bit (easier) getting around and being able to take your time looking at the facilities. But at the same time you miss seeing that energy, seeing the kids who are here attending school that can speak to everyday life at Liberty."

He said the most effective recruiting strategy for any of the Club Sports coaches is simply getting prospective players on Liberty's campus, which often sells itself.

"As coaches, you see perceptions change when people are able to visit," Boettger said. "You see more of an openness when they see what Liberty has to offer — from the academic side to the facility side to the activities and the overall spiritual emphasis, too, which is impactful in a big way."