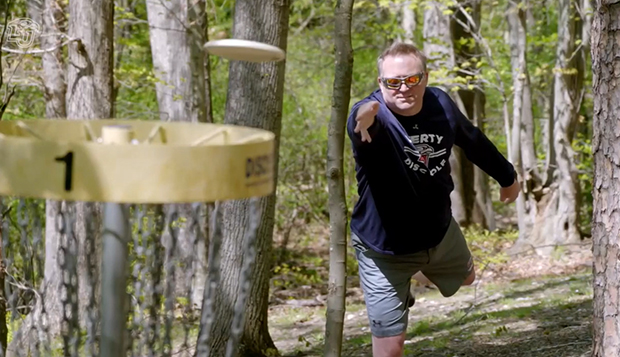 Liberty University disc golf Head Coach Steve Bowman is featured on this week's episode of Game On, Liberty's 30-minute video sports broadcast aired on ESPN+ that includes in-season highlights and inspirational stories from around the university.

Bowman, who founded the Flames' program in 2011, has designed several courses in and around Lynchburg, Va., including Liberty's two 20-hole links on East Campus and at Hydaway Outdoor Recreation Center.

In the video, he shares how he developed a passion for disc golf growing up in California, but found no place to play after relocating to Virginia in the late 1980s before enrolling at Liberty. He has helped pioneer the sport in Central Virginia and especially at Liberty, where he enters his 10th season at the helm of the Flames' and Lady Flames' thriving programs.

"That's the big part of having that course on campus," Bowman said. "Liberty has so much to offer these student-athletes and kids that are passionate about disc golf, I want them to have an amazing experience. I want them to come back and get better and play it and bring their friends and to say, ‘It's fun. Let's go try it.' So that's what it's really about."

Five-time Professional Disc Golf Association world champion Paul McBeth who has led clinics on campus for Liberty's players and went undercover to try out for the Flames on a previous Game On episode, is also featured in this week's segment.