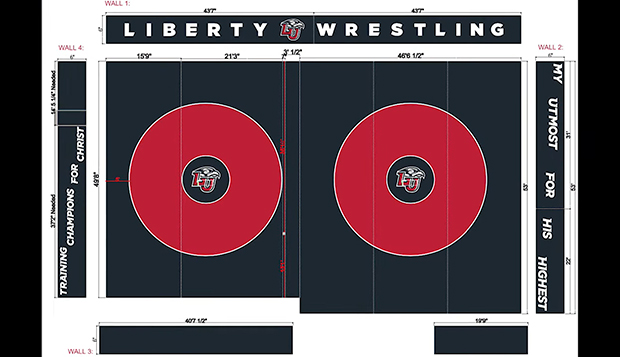 Liberty's wrestling program is in a fundraising effort to cover the $53,000 cost for two new mats in the practice room.

That area includes a 4,800-square-foot practice room as well as a wrestling-specific weight room and a weight-cutting equipment room to be stocked with stationary bikes and treadmills.

"The square footage of this wrestling practice room is by far larger than any space that we have had in the past," Castro said. "This is an incredible room. In the state of Virginia, among NCAA Division I programs, this might be one of the larger spaces for wrestling training."

The program will also have its own athletic training room with tables and an ice bath, team rooms, a conference room, laundry room, coaches' offices, and men's and women's locker rooms with showers and saunas.

From the early years after transitioning from the NCAA Division I ranks to the National Collegiate Wrestling Association (NCWA) in 2012, the Flames have experienced tremendous success. They captured their first NCWA Grand National Championship team title in 2015, the culmination of a four-year rebuilding process.

As three-time defending National Duals and Grand National tournament champions, Liberty has established itself as an NCWA dynasty in recent years. Now, the Flames will finally have a top-level facility to help build on that foundation.

After being based in the former Macy's building at River Ridge Mall over the past two years, Castro and his coaching staff are eager to utilize the new training center — which will also house the men's and women's crew and taekwondo teams and women's gymnastics team — starting this fall.

Before hitting the mats, however, the men's and women's teams must raise $53,000 to cover their cost.

"We have an opportunity to raise the funds for these mats," he added. "The quote is in, we are ready to make the order, but now we are trying to raise the money to do so. We would love to have you involved and engaged in our program."

He called on wrestling alumni, in particular, to help spearhead the fundraising effort.

"Many of you, the wrestling program has invested in you, not just financially, but also spiritually," Castro said. "(Founding) Coach (Bob) Bonheim, Coach (Don) Shuler, and myself would like to think we have invested our lives into you and hopefully, you are better because of that. Now you have the opportunity to invest in the lives of young men (and women), so we want to ask you if you would be willing to contribute toward this endeavor."

While most of the wall space in the practice room will be branded with Liberty logos and painted with inspirational scriptures and words of motivation, one section will be reserved in appreciation of financial contributors to the Gold Eagle Club (donations of $2,000 or more), Silver Eagle Club ($1,000 or more), and Bronze Eagle Club ($500 or more).

To contribute toward the wrestling mats, or to support any of Liberty's 41 distinct Club Sports programs, visit the donation page.