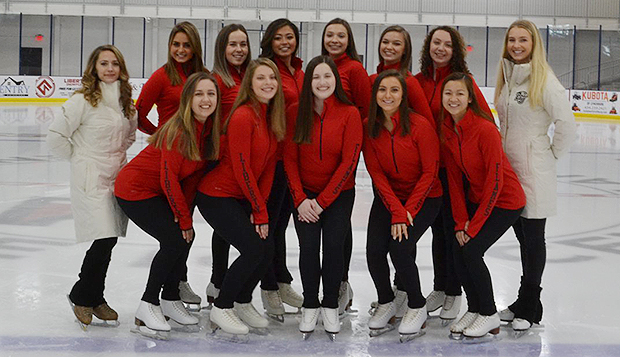 "It's been really great learning from Tatiana the past four years," Hughes said. "Since I started, she has continually given me more opportunity to lead, and with her guidance I am really excited to help the program grow and develop in the years to come."

Payne, who founded the synchronized skating program in 2008, will continue to serve alongside Hughes as associate coach for the Lady Flames' figure skating team, headed up by Dawn Harter, which Payne also started in 2010.

"Figure skating is the passion that drew me to the job that I am in now," said Payne, who was recently invited to be a member of the U.S. Figure Skating Collegiate Committee for this year, discussing policies and procedures for collegiate synchronized skating and intercollegiate figure skating. "As I have had the opportunity to see the Club Sports department grow, I have enjoyed the aspect of the job of working with and investing in coaches and skaters and female student-athletes as a whole."

Hughes, who was hired by Payne to be Club Sports' first Compliance Coordinator in 2016, earned her undergraduate degree in communication with a concentration in advertising and public relations in 2016 before completing her master's in strategic communication in 2018. She is currently working on her PhD in communication with plans to become a professor.

"I really enjoyed working with Emily over the past four years and seeing her grow as a coach," Payne said. "She has shown the ability to build great relationships with the skaters and has taken initiative with recruiting. Her vision for the team is in line with where I see it going and I am really excited to see how she continues to grow it in the years to come."

Though she didn't compete in figure skating or synchronized skating at Liberty, Hughes has more than 13 years of skating experience at the state and regional level. Growing up in Minnesota, she was a United States Figure Skating Association (USFSA) double gold medalist in Moves in the Field and Free Skate. She also competed with Team USA's Junior synchronized skating team and with Team Braemar, which claimed the 2014 USFS Synchronized Skating Junior National Championships title and competed internationally at the 2014 French Cup.

Hughes has seen the Lady Flames' synchronized skating team make rapid strides as it has risen through the collegiate ranks.

"My first year of coaching, we were an open collegiate team," she said. "Since moving up to the collegiate division, we have been able to attend nationals, which has been really big for our program to see it grow and attract a higher level of skater. We are seeing more and more recruits coming in with synchro experience … which allows us to focus on getting higher marks and skating more difficult elements."

With only five returning synchronized skaters after graduating a large senior class, Hughes is actively working to increase the roster to at least 12 skaters, the minimum for collegiate teams to compete with. She anticipates half of this year's team will compete on both the figure skating and synchronized skating teams.

"It's been nice because competitions typically fall on different weekends, so it will give them more opportunities to skate," Hughes said. "This year, all the figure skating competitions will be in the spring, so we won't overlap at all for the fall semester."

Rising seniors Hannah Pulley and Emily Wilson, who will likely also compete in figure skating, will serve as team captains for the upcoming season.

"They both have a lot of really good leadership qualities," Hughes said.

Wilson works with the music, setting the counts to specific moves to help the skaters stay on beat and unified on the ice. Pulley helped the team's recruiting efforts by developing relationships with high school skaters at competitions the Lady Flames traveled to last season, including Jacalyn Hagar from Michigan, who will join the program this fall.

COVID-19 has made the recruiting process more difficult, closing many rinks being since mid-March and canceling a recruitment weekend event in conjunction with College For A Weekend (CFAW) in April, when it also turned the team's annual Praisefest into a virtual event.

"Hopefully, we can still have our Synchro Boot Camp weekend at the beginning of the semester, to test everyone's skill level and see what we need to focus on improving in the first few weeks," Hughes said, noting she has already selected the music for the team's three-and-a-half minute routine. "Then we will start choreographing our program."

The Lady Flames will compete in the Boston Classic and Kalamazoo (Mich.) Kickoff in November before traveling to Eastern Sectionals in Massachusetts in late January and potentially making their consecutive third trip to U.S. Synchronized Skating Collegiate Nationals, held in Las Vegas from Feb. 24-27.

"That would be a huge opportunity for us," Hughes said. "We would need to fundraise a little more throughout the year because it would be a costly trip."

Pulley and Wilson are working with LU Serve to develop a team service project after helping at Park View Community Mission in Lynchburg last year.

"One of the main goals of our team is to always try to keep a bigger perspective," Hughes said. "It's not all about skating. We want to be a light to the community of Lynchburg and to the skating community, to share Christ's love with those we encounter."