Lightweight wrestlers look to create buzz on campus this fall 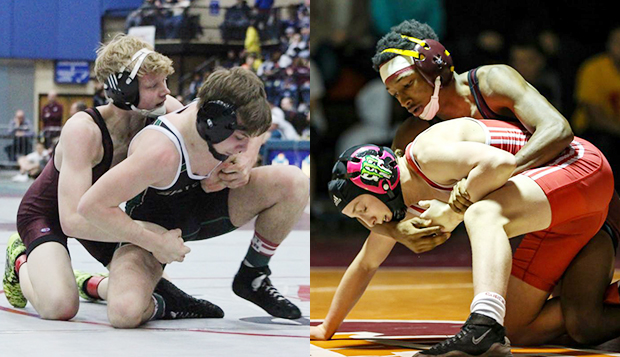 They are the latest of a strong class of lightweight wrestlers recruited by Head Coach Jesse Castro and Assistant Coach Chris Williamson since the Flames clinched their third consecutive NCWA Grand National Championship title in March.

Fyffe went 144-27 throughout his four-year career, capped by a 40-0 senior season in which he recorded close to 30 wins by fall. He and Good, who posted a 138-27 record for the Bees with more technical falls than pins, will strengthen an already loaded incoming freshmen class.

"I'm excited for them," said Brookville Head Coach Warren Stewart ('90), who completed his fifth season at the helm and 15th overall with the program. "I am glad they are staying in the area. Both will be a good fit at Liberty in Jesse (Castro's) program. It will be particularly exciting that they are local boys competing for a local team. I plan to watch them."

The Liberty Athletics Hall of Fame Class of 2018 inductee, who became the only NCAA champion in program history in 1988, prepared all five of his sons for collegiate careers, including Reid Stewart, who placed third at 141 pounds to help the Flames clinch the NCWA Grand National team title in 2018.

He said both Fyffe and Good modeled a similar work ethic as his sons and kept their eyes on the ultimate prize throughout their senior seasons.

"Jalen and Garrett both really wanted to be state champions this year and I really appreciated their commitment to the program," Stewart said. "They both wrote it on the wall, and the light came on their senior year. They were determined, and they did everything they needed to do. They made all the right choices, and they didn't take the foot off the gas until they got onto the podium."

He said in wrestling, where there is a will, there is a way. Both were overcomers with strong faith who relied on the Waymaker to achieve their goals.

"A lot of it was hard work, a lot of it was willpower," Stewart said. "As a coach, I was absolutely impressed with those guys' will and determination. As a college coach, if that's what you're getting, that's a good thing."

"He avenged a loss in every round, beating someone who had beaten him earlier in the year or in previous years," Williamson said.

Good will likely contend for his share of starts at 141 pounds while Fyffe battles for mat time at 125 along with twin brothers Johnny (125) and Connor McCann (141), incoming freshmen from nearby Liberty Christian Academy.

"Fyffe might be the most legit 125-pounder because he's muscular and athletic, but he's lean," Stewart added, noting that it is often difficult for collegiate wrestlers to make that weight class.

Though they were teammates for the Bees at similar weight classes — Good won a state title at 126 pounds and Fyffe at 113 pounds after Good wrestled at 113 and Fyffe 120 as juniors — they rarely sparred against one another in practice.

"We're both very competitive," Good said. "That's why we didn't go at it in practice, because it didn't always end well. We've been wrestling each other since elementary school but we both went to different schools up through middle school."

"Garrett practices with bigger guys, but without a doubt, every day, he is pushing me to be a better wrestler, to be a better teammate," Fyffe added. "That's the type of friend you want to be around."

Fyffe and Good plan to room together, along with fellow lightweight recruit Justin Mutter, a friend from rival Staunton River High School in Moneta, Va., who they have known since childhood.

Both Fyffe and Good are looking at pursuing degrees through Liberty's School of Business. Good, who sported a 4.15 grade-point average at Brookville, is considering majoring in economics with a minor in sport management. Fyffe, who is working on a hog farm in Forest as well as on a construction site this summer, wants to run his own farm, start his own construction company, and open his own wrestling facility in the future.

"Those are the three biggest things I'm interested in," Fyffe said. "I'm always looking for a challenge."

Both have enjoyed wrestling for the Virginia Gold club directed by Castro and watching the Flames out of their shared practice facility growing up, which is what inspired Fyffe to become one.

"I like being close to home, like the campus, and the foundation Liberty has for wrestling," he said. "They really do demonstrate Christ-like leadership and create Champions for Christ, and that's the type of team I want to compete with."