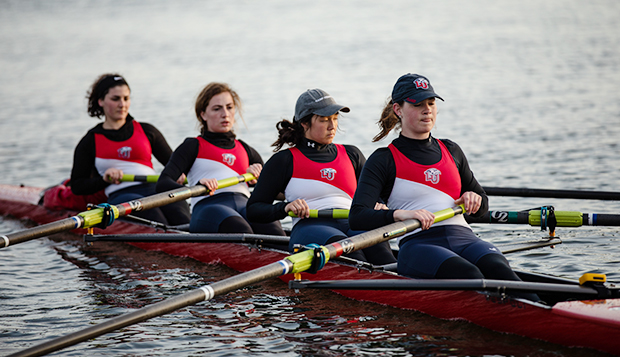 A promising spring season for Liberty University's men's and women's crew team was washed out by COVID-19, leaving disappointment in its wake for Head Coach Debbie Prowse and senior rowers who were unable to complete their collegiate careers.

"We were really anticipating a strong season and we really hit the ground running in the fall," Prowse said, noting that the reigning ACRA National Champion Lady Flames Novice 4, which moved up to the Varsity 4 level, enjoyed particularly strong showings at the Oct. 19-20 Head of the Charles in Boston, Nov. 2-3 Head of the Hooch in Chattanooga, Tenn., and the Nov. 9 Head of the South regattas, earning bronze and gold medals in the latter two. "We had a great time together with that women's 4 and men's double and added some new kids who came aboard."

Indoor erg training improved fitness levels and put the rowers in an even better position to row for medals during the sprint race season in April and May.

"Moving on into winter training, we worked super hard as a team and individually, getting stronger, faster, getting set up for the spring season," Prowse said, before the schedule quickly unraveled in March. "Everything kind of snowballed in the spring. Once the Ivy League season was canceled and then the NCAA canceled, we just read the writing on the wall and kind of knew what was coming."

She broke the news to her team the Friday before Liberty's Spring Break, when it was planning to stay at their home base at Smith Mountain Lake for a week of two-a-day training sessions and team bonding.

"That was a tough meeting," Prowse said. "It was really sad to think about all of the hard work they put in. We know we're not the only ones — we're in this huge community of athletes that it happened to, also — so that made it a little bit easier, but at the same time, it was a heartbreaker, especially for my seniors that won't be coming back in the fall. It was really rough and you just have to take the time and mourn that loss.

"I don't think a day went by that I didn't think about those kids and miss them and just wish it could have been different," she added. "But that's just the way that it is. You've got to take it and just move on and come back stronger next year."

After completing their spring semester studies online, several Liberty rowers were able to check out rowing machines to train on indoors over the summer months, following personalized workouts prepared by Prowse that include running and weight training.

"That's the big thing right now, just keeping up their cardio base because it takes the longest amount of time to build up that aerobic fitness," Prowse said, who hopes the layoff only increases her rowers' resilience and determination to excel when they get back out on the water. "Don't ever take it for granted again. Take every erg piece and just be all in for everything. As much as they can do with those (workouts) over the summer will really help them to come back strong."

She has already designated team captains for next season, replacing seniors Ryan Krupansky and Brad Weisman, and is excited to recruit potential team members at tryouts in late August or early September.

"Ryan and Brad were integral in our leadership," Prowse said, noting that rising junior Lindsey Bicknell has been promoted to the overall team captain while rising senior Joanna Moran will serve as women's captain and rising sophomore Timothy Bentz will be the men's captain. "We're looking forward to having that leadership and continuing on with that team culture, preparing our team for a positive year and just doing whatever we can over the summer to be trained for that." 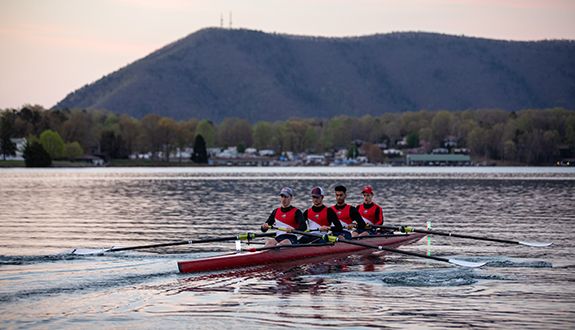 Members of the Men's Novice 4 team row in an early-morning practice at Smith Mountain Lake.