Figure skaters eager to sharpen skills for another national bid 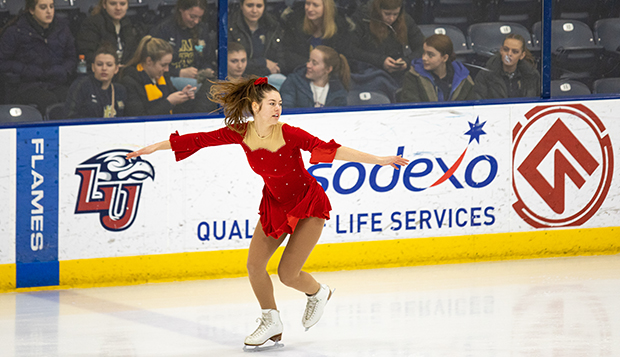 Pre-Juvenile skater Aviana Dettmer was one of nine graduating seniors to compete in the Eastern Sectional event at Liberty's LaHaye Ice Center in February. (Photo by Joel Isimeme)

Nine graduating seniors have left a large number of on-ice starting spots open for Liberty University's figure skating team as it prepares for the 2020-21 season. A total of 10 returning skaters will be complemented by the addition of a few members of the synchronized skating team and incoming recruits to fill the void.

"They're all eager to get back out on the ice and keep practicing to get ready for the next year, and I'm excited for the recruits coming in," Lady Flames Head Coach Dawn Harter said. "I have quite a few that are connected already and wanting to be part of the team. They're eager to get out there and show what they have."

She laid the foundation for a successful season last summer, which culminated in solid runner-up showings at both Eastern Sectional competitions, hosted by Liberty at the LaHaye Ice Center on Feb. 16 and overall champion Delaware on March 11. That clinched the Lady Flames' first-ever bid to the U.S. Figure Skating Intercollegiate National Championships, set for March 27-29 in Minneapolis, Minn., just a week or so before COVID-19 canceled that event.

"We had a really exuberant team this year, really wanting to make nationals, so that was really on the mindset from the get-go when they were first on the ice in late August and early September," Harter said. "Having the competition here on our home ice was definitely something that was a motivator … even people on the team who didn't have a chance to compete to encourage one another. It was pretty exciting. We were able to fill all 30 starts, the total amount we could have."

With many of them away for Spring Break, she didn't have the opportunity to break the news to her skaters in person that they wouldn't be making the trip to nationals after all.

"It was a difficult process," Harter said. "Without that togetherness, that unity, we weren't able to console one another physically. We had to use Zoom and email and phone calls and texting to try to connect. Many of our seniors had a difficult time with it because it was something that all four years that they were here, they were eager to attain."

She acknowledged it will be a challenge to repeat the performance levels of last season's skaters this coming season, but the Lady Flames are working in the offseason to be prepared to give it their best shot come spring.

"We're going to have to raise the bar a little bit," she said. "Hopefully this coming season, we'll have all three (Eastern) competitions because we only had two last year. They might be all in the spring, with nationals being a bonus. That might be a great thing for us because we will have the whole fall semester to prepare."