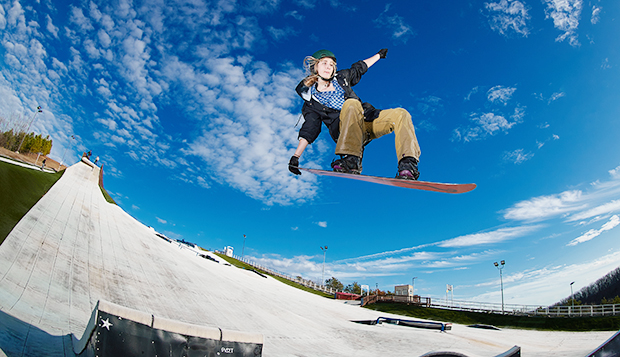 "Going into this season, we weren't really sure how the team was going to shape up," Flames Head Coach Isaac Gibson said, noting that senior snowboarder Milo Rice, who placed second and third at nationals, and skier John Hunt were two of the top returning athletes with expierence. "We had so many new students come in, as freshmen and transfer students or just (returning) students who heard about the program and wanted to get involved. The team grew tremendously, especially on the female side, which has been really cool to see."

Having his wife, former Lady Flames competitor Jessica Woody, working with the women's snowboarders opened the door for more women to experiment in the sport, and for those with experience to take their skills to the next level. That included freshman two-time national champion Coleen Leja who won both the Rail Jam and Slopestyle competitions to lead her team to podium finishes.

"In the past, we would maybe have a few girls in the program and there were plenty of years where we haven't had any," Gibson said, noting Woody's arrival eliminated the intimidation factor for women interested in trying the male-dominated sport. "Bringing in a female coach has been a huge help in being able to have someone for the females to work directly with.

"In one season, seeing so many girls coming in and having a lot better balance, that is a huge part of having a female program that is really attracting other females to want to join for the community aspect as well as being able to compete," he added.

The greatest place for both men's and women's team members have to find their edge is the on-campus  Liberty Mountain Snowflex Centre. The year-round facility features synthetic slopes as well as a terrain park to train for Rail Jam events and jumps to prepare for Slopestyle and Big Air competitions.

"The Snowflex Centre is such an incredible resource for us that we are able to train and practice throughout the entire fall semester, so that's always such a huge advantage for our team," Gibson said, noting that it also gives the team the chance to invite other schools throughout the region to train with them, building relationships and creating witnessing opportunities."

He said fear prevents newcomers to the sport from practicing technical maneuvers and aerial tricks, but that can be overcome with practice on a consistent surface and landing on the softer surface of the aerial awareness trampoline and Bagjump air bag.

"The physical ability that it takes to perform a lot of these high-level tricks isn't that insane," Gibson said. "it's more so just having the repetition and confidence in being able to do it. It's just such a mental thing. Your average athlete … really hones in (at Snowflex) and gets that repetition that you need."

Youth skiers and snowboarders of all experience levels can participate In the Next Level Summer Day Camp from June 22-26 and Overnight Summer Camp from July 19-24.