Disc golfers carry momentum into summer with fall in mind 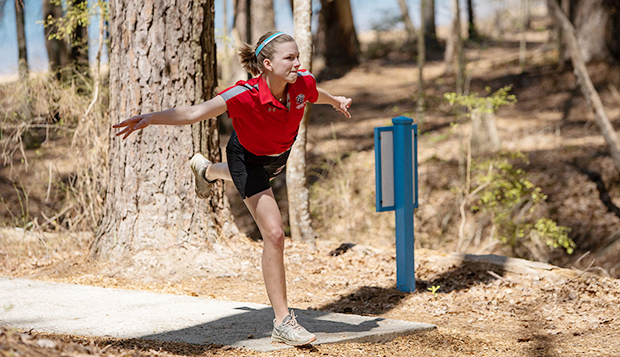 Graduating senior Grace Adkins tees off at a tournament played this past fall before nationals were postponed this spring.

"It was pretty exciting to have all of those schools there, to win that tournament was pretty amazing," Flames Head Coach Steve Bowman said. "So at least we ended the season with an amazing highlight-rate tournament with great memories."

Bowman, who heads up the CDG's Blue Ridge Conference, which hosts the Flamethrower National Qualifier in November, said his team was just starting to peak in preparation for nationals, set for early April in Rock Hill, S.C.

"It's hard to look back and see all that, the momentum that we had, because that's huge for any sport, for any team," Bowman said. "There was a lot of momentum sitting there on the plate moving onto nationals just three weeks after (Spring Break). It would have been a neat opportunity to see what could have happened. But I felt like we did amazing. Every opportunity we were in, we stepped up to it."

He said the CDGNC has yet to officially cancel the national tournament, and it may overlap the 2020-21 season, when two titles could be at stake in a span of two semesters.

"They still want to have a 2019-20 national champion, so it may carry over to the next school year," Bowman said. "The next window of opportunity might have to roll into the fall."

In the meantime, he is confident his returning players are staying active in the sport and will be ready to give opposing teams their best shots when collegiate competition resumes.

"We've got a great recruiting class coming together," Bowman said. "The incoming freshmen and even our freshmen who are going to be sophomores, they're putting the time in. They're super passionate about the sport so to have this time at home, I have no doubt that their level of ability is growing because this is all they want to do. You take away the schoolwork, the tests, the work, the job, what are they going to do? They're playing disc golf."

Triston Lambert, from Newport News, Va., who has competed in a number of professional tournaments, has committed to join the Flames this fall. He will make his first visit next week when ExperienceLU activities and daily campus tours resume. Those events, as well as the College For A Weekend (CFAW) in early April, were suspended for a period of more than two months.