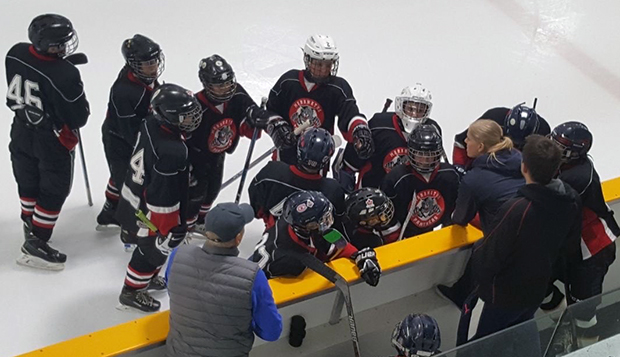 The Lady Flames finished runner-up to Minnesota at nationals her senior season before going on to capture the first three championships in Liberty Hockey history from 2015-19.

"That last year, we were really hoping to come home with a win (in the finals), so it was a bit disappointing," said Peleshok, a LaSalle, Ontario, native who totaled 29 goals and 23 assists her junior and senior seasons. "I am happy the following years' teams were able to clinch those championships. It is a wonderful testament to how the hockey team has developed and progressed since I was there."

She said her time at Liberty shaped her life, both personally and professionally, as she has pursued a career as an elementary school teacher. Professors in the School of Education — where she became certified to teach K-12 with a focus on elementary education — and the exercise science department through a concurring physical education teacher licensure track, had a lasting influence.

"I had phenomenal professors and mentors during my time at Liberty and I am so grateful and blessed to have had such a wonderful learning experience," Peleshok said. "The way they invested their time to help us reach our full potential really meant a lot to me and I have strived to display the same characteristics they displayed for me in my own teaching."

In 2015, she went on a month-long mission trip with Dr. Monica Parson — one of her closest professors and mentors in Liberty's Allied Health Professions — to the island of Maui with Christian Youth Ministries of Hawaii, where she helped lead local outreach missions, participated in service projects, and run a VBS for a local church.

As much as her professors made an indelible impression on her teaching career, continuing her hockey career at Liberty positively impacted her athletic success and the relationships she formed.

"I played with a number of amazing and unique women over the course of my career and it was wonderful to build those friendships and to see where life has led them after Liberty," Peleshok said. "The stories of transformation are a testament to all of the people involved who really care about not only your personal development, but also your spiritual walk and relationship with Christ. The foundations that the school and the program have with that spiritual focus in mind was really encouraging."

She said joining the Lady Flames provided instant connections throughout her career at Liberty that she would have missed as if only a student.

"The hockey team and coaching staff are all one big family, and especially being so far away from home (in Canada), it is not an easy adjustment at times, so it was nice to have that support system put in place with other like-minded individuals," Peleshok said. "As a team, you have the same desires and goals, but at the end of the day, your mission is to display God and his glory through the talents and abilities He's provided you with."

Knee injuries, accumulated over her soccer and hockey careers, have prevented Peleshok from continuing to take the ice as a player since graduation. But she has been able to instill her passion for sport to youth at Maranatha Christian Academy, a private school in Windsor, Ontario, where she started teaching French as a second language and coached soccer, hockey, and badminton on the side.

"The year I took over as head coach of the boys hockey team, we won our first-ever division championship," Peleshok said. "It was a really awesome experience."

She was also involved as a youth ministries partner at her home church, Campbell Baptist Church in Windsor, before relocating two hours northeast to London, Ontario, where she is entering her third year as an elementary school teacher for the Thames Valley District School Board.

Though now working in a public-school setting, she has still managed to live out her Christian testimony to her students.

"It is a pretty secular environment, but I always try to teach the fruit of the spirit to the kids, by walking by faith," Peleshok said. "Kids are very receptive and observant to the ways you conduct yourself. Are you cool and composed? Can they talk to me openly and freely without judgement? Do I lead by example and show that I am a Christ follower in every aspect of my life?

"I believe I am able to demonstrate God's love and compassion for others through my daily walk with Christ," she added. "I strive to live my life in a manner that displays God's love, patience, and mercy and where I am a positive role model in their lives."

Peleshok has returned to the Windsor area to spend this spring and summer with family while waiting for the schools to reopen in London.

"It is hard right now, as everybody is adjusting to being under COVID (restrictions), but we are trying to stay positive and optimistic for the fall and hopefully getting back to normal," Peleshok said.

Over the last several years and in the near future, Peleshok has enjoyed teaching her five young nieces and newest nephew how to skate, and hopes to eventually introduce them to the game of hockey.

"Hockey is Canada's sport and watching them enjoy it at their age is a nice way to see how it will keep going from generation to generation," Peleshok said. "Coaching is a wonderful avenue to continue in the sport and is something I've always enjoyed doing — helping kids to find what they're interested in and giving them the opportunity to excel at something."