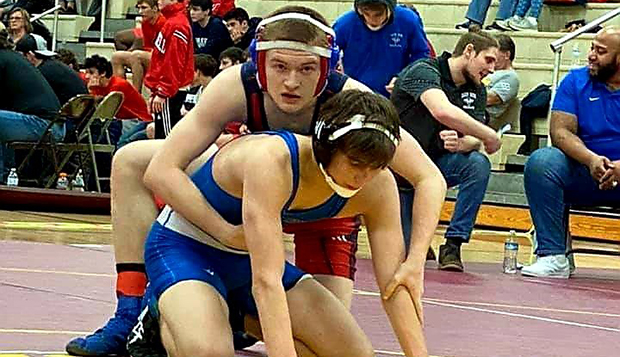 Following an agonizingly slow start in the sport, incoming Liberty University men's wrestling 141-pound recruit Kaden Unroe has a testimony of perseverance from his nine years of competitive mat experience.

The Lynchburg, Va., native has only recently tapped into his God-given potential after not winning a single match in five seasons before launching his high school career at Liberty Christian Academy (LCA) — a skid he estimates at over 100 losing decisions and falls.

"When Kaden first started wrestling, he didn't have a lot of success, but he had stick-to-it-iveness," LCA Head Coach Paul Anthony added. "He's still more of a learning wrestler, but he has a pretty fantastic work ethic and a strong Christian faith, which is why we wanted him to be a part of the team."

Unroe notched his first victory as a freshman 106-pounder for the Bulldogs, but that was his only win that year.

Remarkably, he went on to eclipse the 100-win mark for his career during the Seminole District tournament this past season, factoring in the three matches he won to claim the 145-pound title at the State Games of America, hosted by Liberty last summer.

"He is the type of kid that puts in the work and continues to improve his craft," Anthony said. "He hung in there and got better and better and has had really good results."

Unroe is quick to give credit where credit is due, and his wrestling success has mirrored his spiritual growth.

"I pray before every match and, win or lose, I pray afterwards," he said.

Unroe is still in the refining process to become more consistent through trials on the mat, but he has proven to be hard to beat when on a hot streak.

"He's one of those wrestlers who, when he got on a roll, did really well," Anthony said. "This past year, he was up and down, but he won 17 straight matches during one stretch."

"It's been one heck of a rollercoaster ride," Unroe added of his career, noting wrestling is a sport of momentum shifts. "It's more mental than anything, even though it is physical. There's a mental side that you don't always see. It's two wills pitted against each other, gladiator-style."

He has gained confidence with every victory along his rocky wrestling road and has learned to take calculated risks to affect positive change when things look bleak.

"I'm fairly defensive as a wrestler, but I have found that aggressive strategies are usually more effective," Unroe said. "My senior year, I was definitely more aggressive, taking shots and going for things instead of waiting around."

The prospective mechanical engineering major was hired last week by American Hofmann — the Lynchburg company where his father, Eddie Unroe, works as a machinist — to clean respirators manufactured there before sending them out to assist patients struggling with COVID-19.

Kaden, who competed in karate for his father when he was younger and has recently taken up axe throwing as a hobby, has shown potential to succeed in whatever he puts his hands to, with help from the hand of God.

Due to current restrictions caused by the pandemic, he has been weightlifting out of a makeshift gym set up in his home garage to build up his strength and prepare for his transition to collegiate wrestling.

"I'd like to finish out my wrestling journey at Liberty," he said, noting that he will be surrounded by former LCA teammates Chad Cantrell, a rising senior who won the 157-pound national title in March, rising junior 184-pounder Josh Avery, rising sophomore 197-pounder Josiah Murphy, and incoming freshmen twins Johnny (125) and Connor (141) McCann.