Unkart will add fuel to Flames in lower middleweight classes 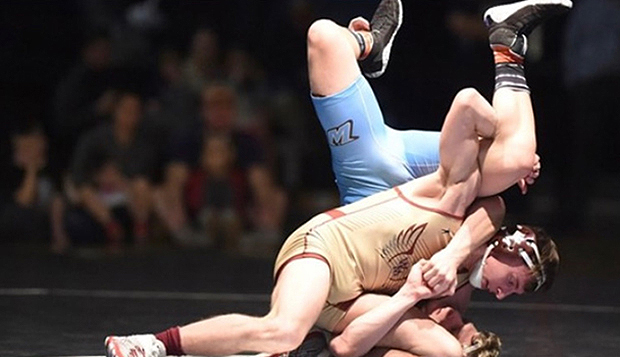 Colby Unkart placed fifth at the Maryland 1A/2A state championship tournament as a senior and sixth as a junior. (Photos courtesy of Thomas Walker Photography)

Even before hearing about Liberty University's wrestling program through a divine encounter at his church in Westminster, Md., Colby Unkart was committed to enrolling this fall based on his College For A Weekend (CFAW) experience last November.

Besides learning more about the electrical engineering program, his chosen major, touring campus, and attending Convocation, Unkart also watched the Flames' Division I men's hockey team's sweep of Ohio at the LaHaye Ice Center and a men's basketball game at the Vines Center.

"The engineering program swayed my decision to go to Liberty, and the atmosphere there and the added bonus of wrestling at the club level made the decision easy," Unkart said. "I loved being on campus; it seemed more at home than anywhere else I've been. I'm excited to see what the future will bring."

Unkart capped a successful football and wrestling career at Winters Mill High School with his best season yet, capturing West Region and Carroll County tournament championships before finishing fifth in the 132-pound weight class at the 1A/2A state championships. He concluded his four-year career with a 130-41 record, losing only five matches over his last two regular seasons wrestling at 138 pounds.

Still, while he was accepted to three colleges besides Liberty based on his academic credentials — he expects to graduate next month with a 3.87 GPA — he had no plans to continue his wrestling career in college before meeting the mother of Flames Assistant Coach Chris Williamson at Crossroads Community Church, where she and the Unkart family attend regularly.

"It was out of the blue," Unkart said. "When I met Chris' mom, I had already been accepted to go to Liberty. She saw me one Sunday and I was wearing a wrestling shirt, and my dad was standing behind him wearing a Liberty sweatshirt, so she came up to me and asked about it and I said I wrestle for one of the hometown schools."

She made the connection and helped Liberty land another solid recruit in an already loaded incoming class that includes 197-pound wrestler Aiden Beall from nearby Damascus High School, who Williamson had coached after growing up in that area and wrestling at a rival school.

"I gave her my phone number and Chris texted me the next week and the next time I saw him was at the state tournament," Unkart said.

"I went to see him at the Maryland state tournament, but he kind of came to us," Williamson added. "My mom told me, there's a kid in my church who's a pretty good wrestler. You should talk to him. He said, ‘I love Liberty, I was hoping you guys would have me.'"

Like Beall, Unkart also played football in high school, starting at defensive end his junior and senior years after picking up the sport in elementary school.

"That was something to keep me in shape that gave me a break from wrestling, which gets very strenuous on my joints when I compete in it year-round," Unkart said.

He has developed an excellent work ethic through wrestling, which translates well to the classroom and his warehouse job at Lowe's.

He believes his skills on the mat will transition smoothly to the college ranks.

"It's all about really fine-tuning and dialing in technique and having the cardio for a real six-minute match because in high school, not many matches last that long," said Unkart, who won a large share of his bouts by pin. "My general game plan is to do an underhook that leads to a first-period takedown and a crossface cradle. That's generally how most of my quick matches go and what I'm known for."

Off the mat, he is involved in his Young Life group at church and plans to participate in a month-long work crew this summer to help that organization "reach out to those experiencing Christ for the first time."

He is excited about the spiritual transformation he is in store for wrestling under Williamson and Head Coach Jesse Castro, while growing in his faith alongside like-minded teammates and building on a dynasty that has won three consecutive NCWA National Duals and NCWA Grand National championships.

"I am definitely looking forward to what the future holds," he said.