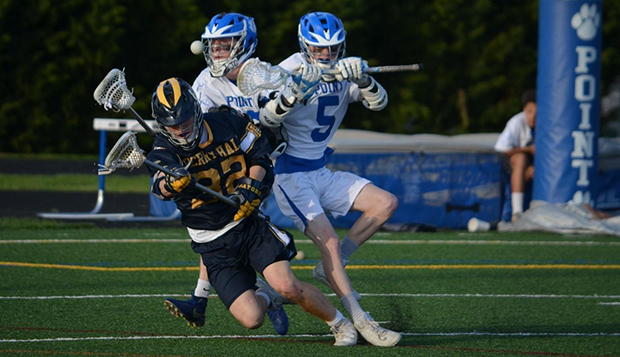 Ryan Merbach (right), who grew up playing football and soccer as well as lacrosse, is a physical two-way midfielder.

Incoming Liberty University men's lacrosse midfielder Ryan Merbach, who grew up in a suburb of Baltimore, a hotbed for the sport, is a natural born leader on the lacrosse field.

Merbach served as a team captain for Sparrows Point High School as a junior, guiding his team to back-to-back regional championships and its first-ever state final.

He scored 77 goals and distributed 95 assists in his three-year varsity career, cut short by COVID-19.

"As a midfielder, I'm a playmaker and a finisher," he said. "I like to go hard to the goal, set plays up, and make more new opportunities for the guys."

He was one of 14 seniors on a team that had a realistic goal of winning its first state championship this spring.

"I like to compete, and I have a big heart," he said. "All of my teammates look up to me, so I wanted to make everyone feel like they were part of the team and wanted everyone to have a good time, win or lose, because we're all family."

After visiting Liberty in November for a Prospect Camp, he is looking forward to the opportunity to showcase his skills and spark the Flames to their first MCLA Division I national championship after beginning his collegiate career this fall.

"I've been running my whole life and have played middie since I was a little kid," said Merbach, who started playing lacrosse when he was 4 before picking up football at age 5 and soccer at age 9. "I love to run and work on my speed. I had a lot of fun playing football and soccer, and they were good sports to play to keep me in shape. But lacrosse came more natural to me, and as I grew up with it, I fell more in love with it."

That passion for the game is what sold Flames Head Coach Kyle McQuillan and his coaching staff on Merbach after seeing him play in person this past fall.

"For us, with the type of team that we're trying to build, he checks all the boxes for us," McQuillan said. "He is a really well-rounded player, who is really quick and athletic, has good speed, and can get up and down the field fast. He has the ability to shoot from the outside and get into the interior, and the ability to use both hands. We'll get him in to the weight room and build up his size, but he is everything we're looking for from a middie for our team."

"Liberty's program had all of the attributes I was looking for and I had a better connection with the coaches," Merbach said. "I liked what the coaches had to offer me. They told me I would make an impact, and I knew this was where I wanted to go, what I want to be a part of."

The sentiment was mutual from the Flames' coaching staff toward Merbach, who will complement an already talented corps of returning middies and other recruits, including Keaton Mohs from Minnesota and Stephen Westlake from Pennsylvania.

"With Ryan, we knew right away had good potential and he should fit really well with guys we have coming in," McQuillan said. "Our midfielder group of guys is vital to our success and we'll continue to try to add depth and experience and expertise and Ryan's a guy who can help us do that right away and over his four-year career."

As well as adjusting to the faster, more physical collegiate game and developing into a better all-around lacrosse player, and pursuing a major through the School of Business and a minor in athletic training, Merbach is looking forward to growing spiritually at Liberty.

Growing up at Emmanuel Baptist Church in Frederick, Md., he was actively involved in his youth group and would help the homeless by building houses through Habitat For Humanity.

"I loved doing it and being a part of that group and being closer to God," he said.

He experienced a similar culture during his visit to Liberty and looks forward to fanning the Flames' passion for Christ.

"I love how the guys are so faithful, how after every game they pray with the other team," Merbach said. "I love the faith that the team has and the pride they have in reaching out to God."

He plans to help the Flames run their Futures Camp, perhaps as early as next summer.

"I love to teach younger kids the game of lacrosse," Merbach said. "It reminds me of when I was a kid and older kids were teaching me to play. I remember falling in love with the game and I want the same for them."