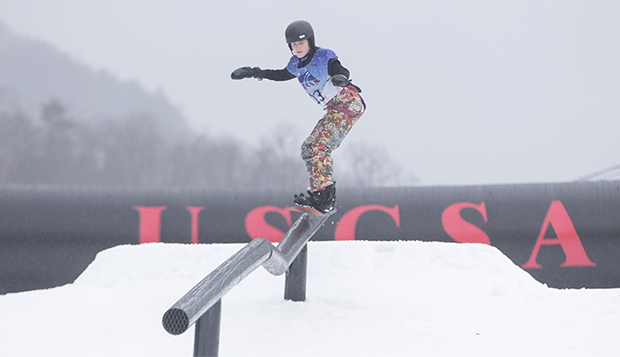 Coleen Leja rides atop a rail during her first USCSA gold-medal-winning performance at Lake Placid, N.Y., on March 10.

She landed atop the podium twice at the March 10-14 USCSA National Championships on Whiteface Mountain at Lake Placid, N.Y. — striking gold in the women's snowboard Rail Jam and Slopestyle events — to lead the Lady Flames to second- and third-place team showings, respectively.

Combined with her fourth-place finish in women's boardercross, Leja was the highest-scoring women's freestyle snowboarder in the competition.

Leja acknowledges she couldn't have completed the tricks she did at nationals without the spirit of the Lord working through her, and the support of her teammates, who quickly became some of her best friends.

"We had a lot of fun and pumped each other up a lot before events," Leja said, noting that they also prayed before every competition. "We had a very good community, which helps at competitions. You're less nervous when you're riding with your friends."

She went undefeated in slopestyle and rail jam events throughout her freshman season, sweeping all the Southeast Conference competitions she entered as well as the Feb. 29 USCSA Mid-Atlantic Regional Championships at Blue Mountain Resort in Palmerton, Pa. Those accomplishments are all the more impressive considering before this spring, she hadn't competed in the sport in four years.

Leja comes from a family of skiers and snowboarders — including her twin brother, Chris, who skies at a college in Michigan — and soccer players, including her younger sister, Ainsley, who has committed to join the Lady Flames' women's soccer team in Fall 2021.

She picked up gymnastics when she was young and learned to ski at age 4 before switching to snowboarding at 9. But when she arrived at Liberty as a business sales and marketing major last fall, she had been away from the sport since a serious concussion nearly derailed her career as a high school freshman, when she hit her head on a rail while attempting a trick.

"I did a 180-(degree rotation) onto the rail and tried a 180 off, but caught an edge of my board and hit the edge of the rail with my head, which caused me to black out," Leja said.

At the urging of her parents and doctors, she took a break from snowboarding and tried non-contact sports such as golf, which her dad taught her how to play, and joined the competitive cheerleading squad her junior and senior years.

"I wasn't in love with either," Leja said. "They were more something to do to stay active, but I definitely missed snowboarding."

While the Christian environment at Liberty is what led her to Lynchburg, the Liberty Mountain Snowflex Centre (LMSC) was a major attraction and allowed her the repetition she needed to safely return to the slopes. She compared her return to snowboarding after a three-year hiatus to riding a bike because of the amount of practice time she had logged on the slopes between the ages of 10-14.

"After school, I would spend hours and hours snowboarding and riding with friends, which developed my muscle memory," said Leja, who took time out of school to head to mountains in California, Colorado, and Utah, and spent the summer months wake surfing behind her parents' boat on the lake where her family lives in Rockford, Mich.

Having LMSC to train on over the fall and winter months smoothed her transition back to competition. She did exercise more caution at first, especially trying new jumps and rail features.

"I like to practice as much as I can and if I'm going to try anything new, I make sure it's definitely something I can do," Leja said. "But I don't really think about it and am not too nervous about it."

On her final run in the Rail Jam at nationals, Leja successfully completed a similar trick to the one that nearly ended her career four years before. She took a 50-50 front approach followed by a 180-degree spin on the flat rail before spanning a five-foot gap to a downrail feature and landed a 270-degree stunt off the rail that helped secure her first gold medal.

"That was really exciting, jumping from one rail to another rail, and it set me apart from the other riders competing because not many girls were even trying it," Leja said. "That was my first time doing it, but I had put down a few clean runs which gave me the confidence I could try something new, because even if I fell, I'd be fine (in the standings)."

She plans to spend more time on the aerial awareness trampoline and air bag at LMSC this year to prepare to execute stunts with higher degrees of difficulty.

"I love rails, but I am not a huge fan of jumps," Leja said. "The Big Air (competition) is probably my least favorite event, but that will come more with practice."

Head Coach Isaac Gibson believes Leja and her teammates have untapped potential in all of the terrain park events.

"The fact that she was able to do as well as she did her freshman year will provide an opportunity for other female snowboarders to come up who are going to continue to excel and progress," he said. "We hope to see her up on the podium again next year," when nationals move out to northern California.