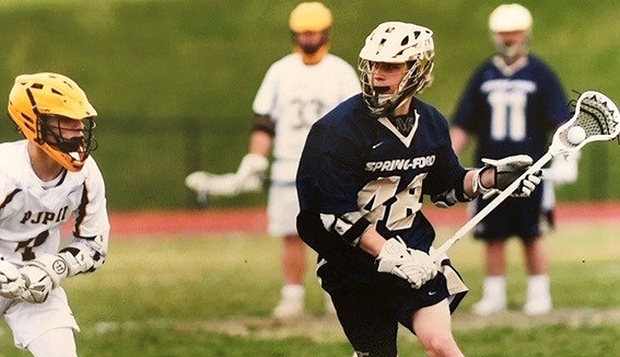 As a two-way midfielder, Stephen Westlake (right) brings speed, endurance, and aggressiveness to the position.

After proving his potential and demonstrating his commitment to Liberty University's men's lacrosse program at the past two spring recruiting showcases, Stephen Westlake, a midfielder from Collegeville, Pa., recently received and accepted an offer to join the Flames this fall.

"We value players that identify with our mission and want to represent something greater than themselves," Liberty Head Coach Kyle McQuillan said, referring to being ambassadors for the university and the Lord. "Any time you have a kid interested enough to come on campus to a recruiting showcase, held in conjunction with College For A Weekend (CFAW), to see what Liberty is all about, that makes our job a lot easier in recruiting. They get a firsthand look at a university that is Christ-following in the way we play the game and run the program."

Westlake was searching for a Christian school and had heard good things about life at Liberty from his older brother Taylor Westlake ('18), a former Flames 197-pound men's wrestler who went on to study in the School of Law. In making his college decision, he weighed his brothers' advice, particularly regarding the friendships he had made with his teammates and spiritual encouragement he received from his coaches and professors.

"Definitely, (its spiritual foundation) was one of the largest contributing factors and what makes Liberty great in my mind," Westlake said.

He will strengthen the midfield as one of at least three incoming recruits at that position to complement six returnees, giving McQuillan the flexibility to rotate in three lines of three players.

"Midfielders are so vital to a team's success and we have a program that puts a lot of emphasis on the midfield position — both on the offensive and the defensive side of the ball," said McQuillan ('07, '11), a former middie for the Flames. "We have been impressed and are excited about Stephen coming in and adding depth and giving us more options at midfield."

While Liberty graduated midfielders C.J. Nichols, Derrick Esh, and Austin Aguilar, it will return fellow seniors Carter Elliott and Noah Rude, who will take advantage of an extra year of eligibility after having this spring season shortened by COVID-19 following a 6-0 start.

McQuillan believes Westlake is a player that can make an immediate impact on the program, even at such a deep position.

"If we feel strongly enough to admit somebody as a recruit, our expectations are the same for all of our guys," he said. "It's going to be an adjustment for anybody going off to college, but we feel confident he's going to be able to come in and be a productive member of the team."

He credits assistants Jessi Glauser and Justin Kilian, who serve as the team's strength coaches, for bringing out the best in new recruits and smoothing their transition to the collegiate game.

"We have a strong philosophy that the best players play and it is all based on the work you put in, so we are excited to get them in the weight room, increase their size and speed, and see players continue to develop, especially early in their careers with us," McQuillan said. "Getting started early in September, guys like Stephen are definitely going to benefit from that as they adapt and get settled to college life, so come springtime, they'll be able to show the potential that they have and be able to contribute right away."

Though he was homeschooled, Westlake played a key role in leading Spring-Ford High School to a conference championship last year.

"That was a really good experience," he said, noting that having his senior season cut short by COVID-19 was "a really big disappointment, for me and my teammates and all of our coaches. I'm pretty certain we would have been able to win our conference again and made some noise in the region and state (tournaments)."

A former wrestler like his brother, he considers himself an offensive-minded midfielder who is also aggressive on the defensive side of the ball.

"My strengths are my speed and endurance," Westlake said. "I like to be aggressive when I can, but that is something I want to improve on, using controlled aggression, not wild."

He expects to be able to pick up the Flames' formations quickly and emerge as a team player and key contributor on both sides of the field.

"The style of lacrosse (at Liberty) is definitely different than what I'm used to, but I think I'll be able to adapt," Westlake said. "Usually in situations like that, I get a feel for it pretty quickly."

Compared to wrestling, which he competed in as a freshman and sophomore, he enjoys the speed of the game of lacrosse.

"I like the flow of it, how it continues in terms of ground balls and change of possessions, and how there's not a lot of down time," Westlake said, noting that sparking a fast break with a ground-ball pickup and outlet pass is one of his favorite things to do on the field. "That's a lot of fun."

Off the field, while he has yet to decide on a major, he has a passion for music, having played drums for many years — including a couple on his church's worship team — and also recently picked up guitar.