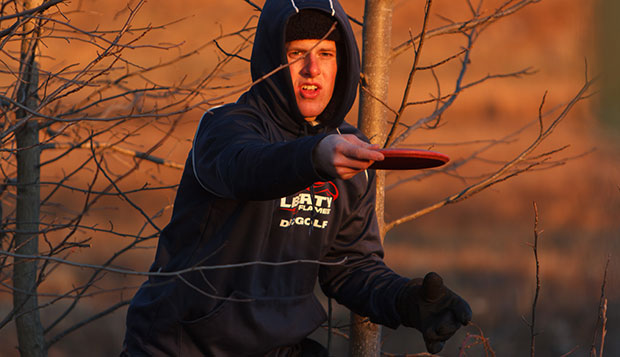 Brown fired a two-round score of 89 on the 18-hole course, just one stroke behind overall winner Mike Smith (88) and one ahead of the third-place Swartz.

Laubscher finished tied for fifth with his 92, only four strokes off the lead.

"We were blessed with an amazing day and closed out the series with some great tournament play," Flames head coach Steve Bowman said.

For the series, Swartz, who competed in six of the eight events, each played on a different course, finished fifth in the amateur standings with 129.5 points followed by Brown (eighth with 101 points) and Laubscher (12th with 85.3).

The team is now focusing on this Friday and Saturday's Liberty Flamethrower, the last qualifier for the April 3 national championships in North Augusta, S.C.

Playing on their home course should give the Flames a decided edge on their competition this weekend, when everyone will play through all 20 holes three times in two days, starting with a round of singles at 3 p.m. Friday and concluding with doubles and singles rounds on Saturday morning and afternoon, respectively.

Club Sports workers will change the course, which has two tee pads and two basket locations on each hole, overnight before Saturday's second and third rounds of play. Therefore, players will not throw one shot from the same tee pad to the same basket over the duration of the tournament.

"It'll be almost like a whole new course," Bowman said. "They'll play one tee pad in the morning and a different one in the afternoon. When you move it back to the afternoon, it changes the skill of the throw you have to do. The angle or type of throw makes a difference."

That's where familiarity with the lay of the land will play in the favor of the Flames.

"The guys are playing quite a bit, getting real comfortable with the course and where their placements are going to be," Bowman said.

Whereas only three out of four individual scores count toward the team total in singles play, four players are needed to compete in doubles.

"You have an A team and a B team," Bowman said. "The A team tees off on odd holes and the B team will tee off on even holes and they use alternating Captain's Choice (rules). That way, you don't have one person always teeing off or one person always putting. So you have to match the strength of your players."

At nationals, teams will compete in one round of doubles the first day and two more the second day before playing three rounds of singles the third day, with those teams in the top 20 returning for a fourth round of doubles on the fourth day.

"You'll almost play more rounds of doubles than singles, so the teamwork really comes into play there," Bowman said. "You've got to get to know each other and what shots each can shoot."

Brown and Laubscher have played doubles together with Swartz teaming with Tyler Andrick, who went to nationals last year. Jared Lebo and Jordan Strother have been posting lower scores lately and could challenge Andrick for the fourth starting spot.

But first, the Flames must qualify for nationals by winning the Flamethrower.

Last year, Liberty finished runner-up by two strokes to East Tennessee, but the Flames had already qualified by winning a tournament in West Virginia.

UNC Charlotte and East Tennessee, which wound up placing 14th at last year's nationals to earn an automatic return bid this year, have confirmed that they will be competing in this weekend's Flamethrower. Bowman is waiting to hear back from Massachusetts, Appalachian State, St. Joseph's (Md.), and West Virginia to see if they will attend the region's final national qualifying event.

"They do have a qualifying round that Wednesday before nationals, so if all else fails, we may have to go down to South Carolina and hope that we win that one day of qualifying," Bowman said. "But we want to qualify at home."