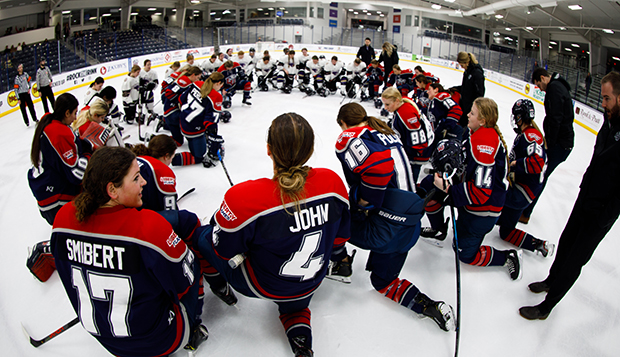 Members of the two-time-defending ACHA Division I national champion women's hockey team huddle up after their last game at the LaHaye Ice Center on Jan. 31.

The 3-minute, 49-second video, set to the song "I Lived" by One Republic, features highlights from all 41 programs, though it relied on more practice footage than usual after COVID-19 shortened the spring sports seasons. Highlight clips were shot primarily by Strawn, Video Coordinator Olivia Becker, and Video Assistant Hayden Robertson.

Normally, the video debuts at the Club Sports Choice Awards ceremony, but this year's event, scheduled to take place in the School of Business that opened this past fall, was also canceled with most of the 600-plus student-athletes returning home and completing their studies online after the March 16-20 Spring Break.

Instead, each team selected three student-athletes — a Most Valuable Player, a Champion award winner, reserved for a senior who has demonstrated commitment, leadership, and service to ther team throughout their careers, and a Rookie of the Year — to be honored during Club Sports Recognition Week.

Here is the list of student-athletes selected from each team: