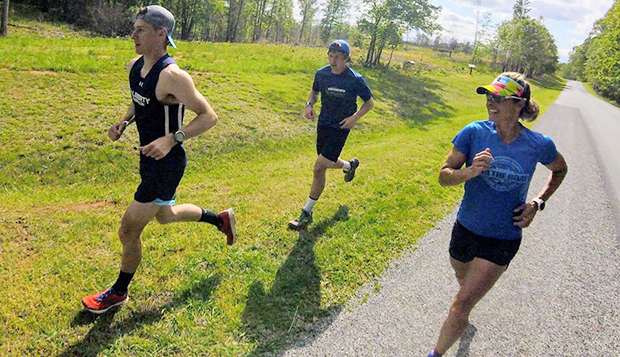 "I was excited to be able to do it," said Fairley, a graduate student in Sport Management: Coaching and Athletic Administration who previously competed in cross country and track and field at a small college in Iowa. "It was a super fun opportunity to be with my teammate, Max, and to be out there doing what you love in God's creation, and to pray and talk to God when things got really tough. I knew there were going to be a lot of ups and downs in an Ironman triathlon, but it was a lot more difficult than I was expecting it to be."

The tandem utilized a course similar to that of last October's Mid-Atlantic Triathlon Conference Championships (which included a 1,500-meter swim, 40-kilometer cycling stage, and 10K run) but completed it four times — finishing the 2.4-mile swim, 112-mile bike leg, and 26.2-mile marathon run in 11 hours, 46 minutes, 59 seconds, at around 7:45 p.m.

"We have seen a lot of people doing these endurance feats lately," Fairley said, noting that many races have been canceled by COVID-19, including last month's USA Triathlon Collegiate Club National Championships in Tempe, Ariz. "With the end of the season coming up, it was good to have an end-goal in mind, something on the horizon to shoot for and to go out and do it."

Galbraith, a rising junior environmental biology major, was planning to compete in the USA Triathlon Off Road Championships in New Jersey in May before that event was also canceled.

"Just to finish was the overarching goal, but we made it our goal to go around 12 hours, and we made it under that, which was good," Fairley said. "The only times we stopped were in the transition zones and to refuel for the run and the bike."

Liberty Head Coach Heather Gollnick, a veteran of 36 Ironman races and a five-time champion, helped prepare her top two men's triathletes for the experience, taking them on a 19-mile training run on the Appalachian Trail in late April. She also ran 18 miles with the duo to help exhort them to the finish line.

"Coach Heather was able to encourage me a lot," Fairley said, noting that she continually advised them to pace themselves. "I hit a wall at Mile 40 of the cycling stage and then at Mile 9 of the run, I hit a pretty huge wall. I was getting tunnel vision and my legs felt like a ton of bricks. I didn't think I was going to be able to keep running, but Coach Heather pushed me through it and after about four more miles, things started looking up and I was able to finish."

Fairley said after both completed the swim side-by-side in 1:01:30, he had to slow Galbraith down on the bike so he didn't get too far ahead and they could continue to spur one another on and pace off each other.

"An Ironman's a long race, so you don't want to go out too hard on the bike and have to run a marathon and feel dead," he said, noting that contestants are not allowed to draft off one another. "There was a lot of elevation change on the bike and Max is definitely a stronger cyclist and he was about 200 meters ahead so I held him back, and that allowed us both to complete it. The last three miles, we got to run and finish together."

He enlisted Bryant Seuferer, a former collegiate teammate in Iowa who will serve with him as graduate assistants on the Flames' cross country and track and field teams in 2020-21, for race support. During the swim, he monitored the two triathletes on a paddleboard before biking alongside them for 30 miles of the cycling stage and the entire run.

Meanwhile, Galbraith's mom, who finished six Ironman races of her own, including a world championship at Kona, Hawaii, in the mid-1990s, provided hydration and food — energy drinks, peanut butter and jelly sandwiches and Cliff Bars as well as warm chicken broth, potato chips, and flat Coca-Cola — out of her vehicle during transitions and between laps.

"At end of the run, I was in a lot of pain because hadn't done anything that long before and wasn't used to the nutritional aspects," said Galbraith, who estimated he consumed 5,000 calories immediately before, during, and after the race and burned as many as 8,000. "It was not super hot, only in the mid-60s, and it was kind of windy toward the end of the day, but I probably drank over 100 ounces."

Fairley believes he will be stronger for having completed his first Ironman when the team returns to action in the fall semester, starting with the Sept. 11-13 Patriot Triathlon Festival in Williamsburg, Va.

"After taking two to four weeks completely off, I will be motivated and say, ‘Wow, I can push myself through a two-hour race because it's not a 12-hour race,'" he said. 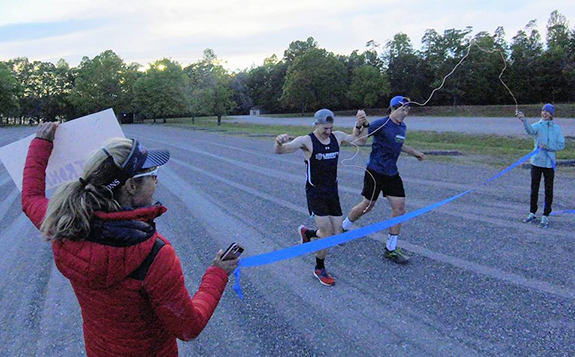 Coach Gollnick holds the tape for Galbraith and Fairley to cross on their last running legs.