Georgia goalie to be last line of defense for men's lacrosse 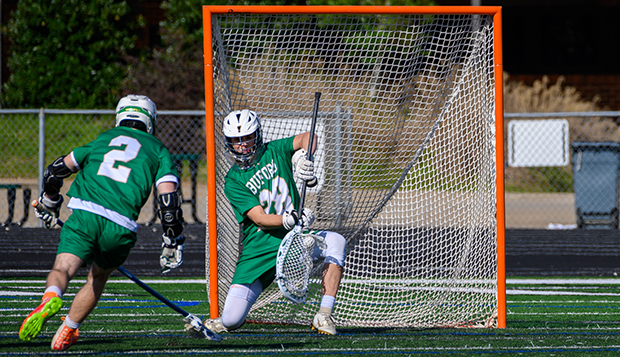 Eric Warnstrom showcases his skills in the cage for Buford (Ga.) High School before the season was canceled this spring.

Warnstrom attended multiple recruiting showcases in the fall and spring semesters and Liberty lacrosse camps — including last summer's when he received instruction from senior goalie Ryan Reynolds alongside 2019 recruit John Pryor, who sat out his freshman season due to injury. He also traveled to Atlanta, site of the SELC Tournament, Clemson, S.C., and Lynchburg, Va., to see the Flames play in person over the past few seasons.

"We saw at our camps that he had a lot of great potential as a goalie," Flames Head Coach Kyle McQuillan said. "With his ability to be in communication with us and really pursue Liberty, he made it very clear to us that he wanted to be here and thought it was a good fit."

However, Liberty's coaching staff couldn't offer Warnstrom a definite spot on the team at that time.

"Looking at our roster and needs, we didn't feel we needed a goalie," McQuillan said. "But (in March), he reached back to us, and as it happened, we did have some changes in our recruits for the goalie position. We had a large group of goalies we were interested in talking with, but Eric's dedication and commitment to wanting to be at Liberty and play for our team prevailed."

His first impressions of Liberty's coaching staff and players made him feel right at home and kept him coming back.

"Liberty was always my top pick," said Warnstrom, who originally verbally committed to play lacrosse at North Greenville (N.C.) University, an NCAA Division II program. "I was really drawn by the coaches and the players and the brotherhood of the team, as well as their work ethic and the opportunities to grow spiritually at Liberty."

Warnstrom has also learned the value of resilience, from his coaching staff at Buford (Ga.) High School, which guided that team to the state Final Four last year and a 7-0 start this spring before COVID-19 canceled the remainder of the season. (Likewise, Liberty was ranked fourth in MCLA Division I and off to a 6-0 start before having its season cut short.)

"We lost a lot of our seniors last year, but in the offseason, we worked really hard and established a ‘sudden change' (strategy)," Warnstrom said, noting that he and his teammates were subjected to extra sprints and workouts after practice to prepare them for worst-game scenarios. "If we went down men (with penalties), we had swagger and confidence on the field that we could get the job done because we were unfazed. That's one of my strengths as a goalie — I can stay cool and confident in high-pressure situations and not get rattled by anything."

In September, he is expected to be one of a few goalies — including Pryor and possibly Reynolds, if he chooses to return for a fifth season of eligibility — to contend for the starting job.

"We are confident that he will transition well to the collegiate game," McQuillan said. "He is going to be in competition with at least two other goalies. We promise them an opportunity to compete — to show us what they've got and prove to us who belongs — and we will let the best player play."

That role won't be determined until after fall ball is finished, leading up to the Spring 2021 season, when multiple goalies could also platoon at the position.

Warnstrom started playing goalie for his ice hockey team before his school added lacrosse to its athletic program when he was in sixth grade and he made a quick transition to the taller cage. Compared to other spring sports like baseball and soccer, he found lacrosse more exciting.

"It can be a high-scoring game, with lots of explosive plays, and there's a physical aspect to it," he said. "I like the team aspect of it, that not one person can carry the team. It takes more of a group effort to get the job done."

He looks forward to building a strong rapport with the Flames' defenders and to maintain good vocal communication with them, as he did with the coaching staff.

Warnstrom comes from a Liberty family as his parents, Justine and Steve, graduated in 1989 with degrees in communication and business marketing, respectively, and sister, Rebekah, will receive her B.A. in English on Sept. 11 after starting her master's degree in August.

He has a connection to Liberty lacrosse as his youth pastor at 12Stone Church's Buford campus is former Flames defender Brandt Grauss ('16), who formerly coached Warnstrom at the JV level at Buford High.

Academically, he plans to major in business and pursue a minor in sport management, with a desire to enter a sports-related career field, possibly as an agent or working with a professional team or collegiate program.