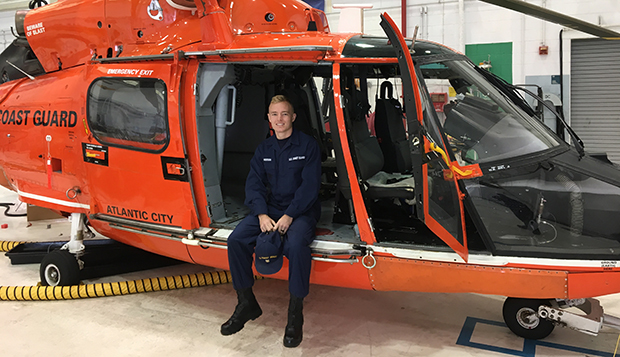 Joseph Anderson ('15), who starred on the Flames' triathlon team, is now a logistics specialist in Guantanamo Bay, Cuba.

As the son of a U.S. Army officer, former Liberty University triathlete Joseph Anderson ('15) lived in some exotic locations throughout Africa and Europe in his formative years.

"Growing up overseas, I was able to adapt to different environments while being away from the United States," said Anderson, who earned his B.S. in Business Administration: International Business. "Having that kind of background helps you adapt to the challenges of living abroad."

Born in Germany on Dec. 2, 1991, two years after the fall of the Berlin Wall, Anderson called Ethiopia and Djibouti in northeast Africa home before bouncing around between Army bases in the United States in the late 1990s and early 2000s. His family moved back to Europe and Africa for his high school years, spent in England, Germany, and Zimbabwe, where he was crowned the Zimbabwean national triathlon champion in 2011.

Now he is again on international soil, based at Naval Station Guantanamo Bay, Cuba, as a petty officer in the United States Coast Guard.

"I do logistic operations, assisting Coast Guard cutters and aviation with all things logistics," Anderson said. "My military specialty is with business, so I am doing Coast Guard finance as well as logistical things that apply to my degree."

He arrived at Liberty in Fall 2011 and had the opportunity to compete internationally at the start of his sophomore season, traveling with then Head Coach Beth Frackleton and then teammate Parker Spencer ('12, who served as head coach from 2014-18) to New Zealand in October 2012 to compete in the ITU World Age Group Championships.

A highlight of his collegiate career was going undefeated in Mid-Atlantic Region races in 2013, when he activated his pro card in the sport. That fall, Anderson directed and won the first Liberty Collegiate Triathlon held on campus, even after taking a detour in the second stage to direct a cyclist from the U.S. Naval Academy who had gone off course. He won the "Performance of the Year" honor at the 2014 Club Sports Awards Banquet for that selfless act.

After marrying Lady Flames triathlete Ginny Mitchell ('15, '17) on Aug. 1, 2015, the couple prayed about their career path while Ginny worked at Liberty and pursued her master's degree in education.

"We talked about joining the military, with the mission of saving lives and protecting our borders, and we felt called to do that as a married couple," Anderson said. "It was a decision we both had to make, because it is a big transition from a civilian to a military lifestyle."

He enlisted in the Coast Guard and the couple was stationed for two years at a training center in Cape May, N.J., where he studied to become a logistical specialist before moving to Cuba. Now, Ginny is working on her EdD in Community Care and Counseling, with a focus on Traumatology, and Joseph is considering starting his graduate studies through Liberty's online programs.

"With the options Liberty gives for military spouses, that is an amazing benefit, and we are taking the opportunity to use our time here to further her education," Anderson said. "I am going to be able to use it as well."

Anderson reflects fondly on his experiences at Liberty, in particular his travels and races with the triathlon team, surrounded by student-athletes who strengthened his faith.

"The camaraderie and friendships I built at Liberty, being on the same team as other believers, was life-changing," he said. "Once you leave Liberty, you're out in the real world, and you are not surrounded by strong believers and people of the same mindset. The kind of decisions I make in life all stem from my time at Liberty.

"My faith carried me through Liberty, and through my job, interacting with lots of young soldiers," Anderson added. "Being able to share my faith with them is a huge part of what I do."

He and Ginny had been attending chapel services on base in Guantanamo Bay before COVID-19 shuttered them. Now, they have reconnected with the Lynchburg, Va., community by streaming live sermons by Thomas Road Baptist Church Senior Pastor Jonathan Falwell.

They have also remained active in training for and competing in their favorite sport, enjoying the open-water swims in the Caribbean and enduring the 90-degree temperatures on the cycling and running stages.

"Triathlon has been a way for us to stay connected and a means of fellowship, training together," said Anderson, who is training for an opportunity to represent the Coast Guard at the U.S. Armed Forces Games. "Ginny doesn't do it as competitively as I do, but as a fun way to stay fit."

Anderson, who is undefeated in runs and triathlons he has entered so far on his base in Cuba — even competing against athletes from other branches of the military, including Marines who guard the base — has a goal of making it to the 2023 World Military Games, in a format similar to the Olympic Games.

Next year, he and Ginny will be transferring stateside, likely to Coast Guard Air Station Clearwater, the branch's largest and busiest air station, near St. Petersburg, Fla. 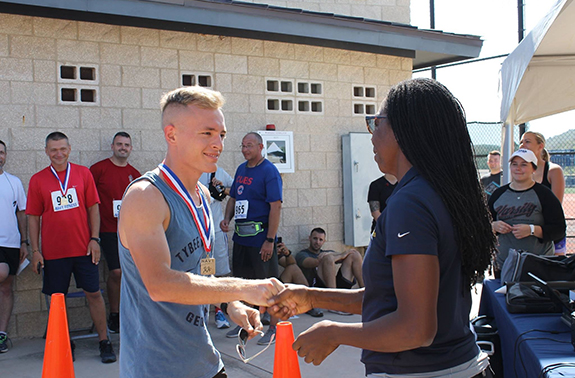 Anderson accepts an award after winning a recent race on his base in Guantanamo Bay, Cuba.