Miller to be Flames' first representative in SELC Hall of Fame 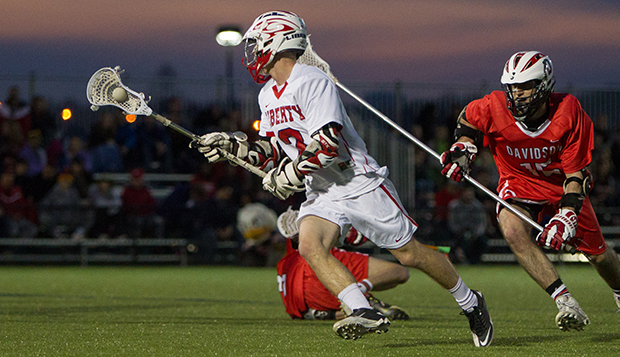 Ryan Miller was a playmaker and prolific scorer for the Flames starting his freshman season at the MCLA Division II level.

Ryan Miller, a standout attack on Liberty University's men's lacrosse team from 2013-16 who helped the Flames transition from SELC Division II to Division I status, will be the team's first representative to be honored in the SouthEastern Lacrosse Conference (SELC) Hall of Fame.

"It is a cool way to end my career," Miller said. "I definitely had a great time playing at Liberty and I have to thank my teammates. We had a great number of offensive weapons, including players transferring in from NCAA programs, who made my job easier."

Miller finished his career as the SELC's and Liberty's all-time leading scorer — surpassing fellow attack Kurt Tobias, who was inducted into the Club Sports Hall of Fame this past December — and tied for the Men's Collegiate Lacrosse Association (MCLA) lead with 337 points on 201 goals and 136 assists. He was a four-time All-SELC First-Team selection, three-time MCLA Athletic All-American, and four-time MCLA Scholar All-American and was named Club Sports Male Athlete of the Year in 2016.

"It is pretty fitting that Ryan will be Liberty's first member of the SELC Hall of Fame," Flames Head Coach Kyle McQuillan said. "He was able to accumulate staggering numbers in terms of goals and assists and helped us transition from a highly competitive MCLA Division II program to a very successful Division I squad. You could argue that there has never been a more successful player from the SELC on a national level."

After graduating in 2016 with a degree in electrical engineering, Miller is working for the Virginia State Department as a facilities project manager, supervising electrical projects such as substation replacements. He also serves as an assistant boys' lacrosse coach at Trinity Christian School in Fairfax, Va., near his hometown of Annandale.

Miller returned to Liberty to compete in the annual Alumni Game over Homecoming Weekend this past fall, going head-to-head with his younger brother, Jackson Miller, a rising senior attack for the Flames who transferred in from Palm Beach Atlantic's NCAA Division II program last fall.

This year's tournament, which would have been held this past weekend, was canceled by COVID-19, as was the remainder of the MCLA season and tournament set for May 10-15 in Salt Lake City. Liberty, which is hopeful of returning many of its 10-member senior class for a fifth season of eligibility, was off to a 6-0 start and ranked fourth in the MCLA Division I Coaches' Poll.