Wirsing following family's lead to Liberty as a triathlete 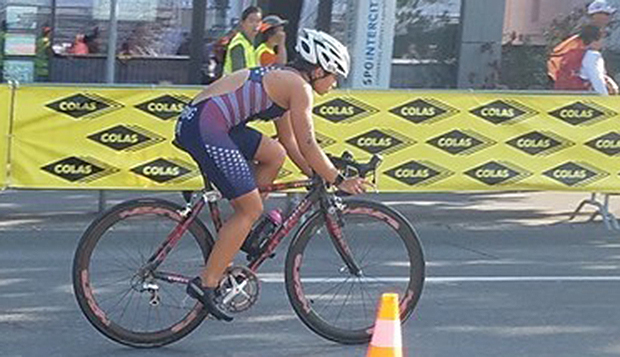 Liberty University's women's triathlon team could feature a new pace-setter in the 2020-21 season with the addition of Anna Kate Wirsing, an incoming sophomore transfer from J. Sargeant Reynolds Community College in Richmond, Va., who has competed internationally.

Wirsing placed fourth out of 10 Americans in the 16-19-year-old age group at the ITU World Championships in Switzerland last September after qualifying with a top-15 U.S. National Championships finish in Cleveland.

She will begin her collegiate career with the Lady Flames this fall, following in her family's footsteps. Both of her parents as well as her aunt, older brother, and future sister-in-law have attended Liberty.

"We have been recruiting Anna Kate for the past year," Lady Flames Head Coach Heather Gollnick said. "She had opportunities to accept triathlon scholarships at other schools, but she chose Liberty and we are beyond excited to have her race for our team."

Wirsing visited campus and trained with the team at three different College For A Weekend (CFAW) events.

"I had so much fun," she said. "The team members were super welcoming and gave me a home vibe. That same week, I went to other colleges I was interested in and didn't get the same feeling."

Gollnick is hopeful that Wirsing can help make the Lady Flames stronger competitors in the Mid-Atlantic Regionals, set for Oct. 17 at Smith Mountain Lake State Park, and the USA Collegiate National Championships next spring.

"We love her personality and passion for the sport," Gollnick said. "She will enter the program with vast triathlon experience and be a top contender and a great fit for our team as we continue to compete as a premier program on the national collegiate level."

Raised in the small town of Goochland, Va., where she works as a YMCA swim instructor for infants to seniors, a high school swim coach, and a lifeguard, Wirsing grew up as a competitive gymnast from ages 5-12 and had Olympic aspirations before two back injuries derailed her career.

In her early teens, she started mountain biking with her father — Jonathan Wirsing ('92) who competed on the Flames' cross country and cycling teams — before becoming a three-sport athlete at Goochland High School, running cross country in the fall, swimming in the winter, and competing in outdoor track in the spring.

She completed her first triathlon while in high school and now has dreams of representing Team USA in triathlon at the Olympic Summer Games in Paris in 2024 or Los Angeles in 2028.

"When I was in Switzerland and saw the elite women going to the Olympics, it is definitely a goal I would want to pursue if it is in God's plan," Wirsing said. "I'm leaning on God and letting Him move me in that direction."

Academically, Wirsing plans to pursue a B.S. degree in Exercise Science at Liberty before going onto a graduate program in physical therapy.

"That is definitely a relatable major field and something I have been super involved in because, since I was 3, I've had my fair share of physical therapy and chiropractic care," Wirsing said.

She has trained for the past year at Endorphin Fitness in Richmond, where founder and director Michael Harlow and other coaches have helped her to thrive as a triathlete by pushing her to make her mentally and physically stronger.

"My end goal is to go pro and I definitely think Heather (Gollnick) will help me accomplish that with my training," she added. "That is another reason why I chose Liberty."

Jonathan Wirsing formerly trained with Liberty Cinematic Arts Assistant Professor Scotty Curlee on Rite Aid's professional cycling team, which he founded and directed. The team's top rider won a criterium in downtown Lynchburg in April 2007 on the first stage of the Tour of Virginia.

Her father's drive in the sport has motivated Anna Kate to excel in the cycling phase of triathlons.

"I never did much road cycling growing up, but it turns out to be one of my strongest legs of a triathlon, though I'm pretty well rounded in all three," she said.

Now, she is converting her dad — who grew up running and playing soccer and hockey in Rochester, N.Y. — into a triathlete.

"Me and him have great competitions against one another," Wirsing said. "He used to beat me a lot because he had so much of a lead on me on the bike, but my times were faster in the swim and the run and I started catching him."

She  is torn over competing in the Aug. 17-23 ITU World Championships in Edmonton, Canada — if they are not postponed after the majority of qualifying races this spring and summer were canceled by COVID-19. That is the same time frame when Liberty residential students arrive on campus for the start of the fall semester, with newcomers moving in on Aug. 19.

As well as improving her speed and techniques as an elite triathlete, Wirsing is equally excited about developing her Christian faith and spiritual walk at Liberty.

"All of the colleges I toured that wanted me (as a triathlete) were Christian colleges, but a huge factor for me was going somewhere that I knew I would grow not only physically, but spiritually," she said. "Having other believers around definitely helps strengthen the bonds within the team. (Coach Gollnick) is a great help in keeping up with team members and, especially coming into the whole college experience, making sure it's a home."