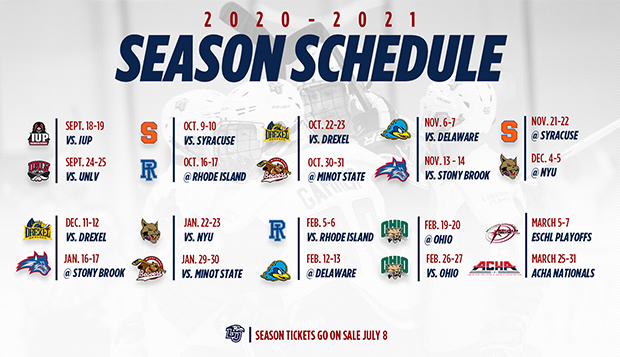 That includes 18 games against teams the No. 2 Flames might have faced at the ACHA DI National Championships in Frisco, Texas, which were canceled due to COVID-19.

The Flames will open the season with back-to-back home series against national tournament qualifiers — Sept. 18-19 against Indiana University of Pennsylvania (IUP) and Sept. 24-25 against UNLV, which could have been their first-round opponent in Texas. The second game against the Rebels will be the first of two Midnight Mayhem contests of the fall semester.

Then on Oct. 9-10, Liberty will open Eastern States Collegiate Hockey League (ESCHL) play by hosting Syracuse before traveling to Rhode Island, the only ESCHL team that did not end the year in the ACHA DI Top 25, Oct. 16-17. The Flames will conclude October with four more games against top-15 teams, traveling to 13th-ranked ESCHL newcomer Drexel on Oct. 23-24 before visiting No. 4 Minot (N.D.) State on Oct. 30-31.

"Drexel was a top contender all year and now that they're in our conference, we will we're playing them four times next year," Handy said. "We have played at Minot State quite a few times and love the competition. We know we're going to be playing a top-five program every year."

Besides seventh-ranked Stony Brook, which the Flames will host Nov. 13-14 before opening spring semester play against Jan. 16-17 on Long Island, N.Y., and Drexel, Liberty has home-and-away series against No. 23 New York, No. 24 Delaware, and No. 25 Syracuse.

"For us, each game matters, each weekend matters," Handy said, noting that it is exactly 150 days until the Flames' Sept. 18 season-opener against IUP. "We've got three on-ice goals in mind — to win the ESCHL regular-season title, win the ESCHL Tournament, and win the ACHA national championship. That is where our focus is, where our focus has to be today. It is of the utmost importance to us — players, coaches, and staff — to do everything we can to prepare ourselves to be the best that we can be on that opening night."

The Flames are coming off their third ESCHL regular-season championship and third ESCHL Tournament championship in four seasons in the conference. The regular-season champion earns an autobid to the 2021 ACHA Men's Division I National Championships, which will be hosted for the first time at the New England Sports Center in Marlborough, Mass., near Boston, on March 25-30. It will be the 10th year of the 20-team format as the ACHA celebrates its 30th anniversary.

In 2022, the tournament will move to St. Louis, in the Centene Community Ice Arena, which opened in September 2019 as the practice facility for the 2019 NHL Stanley Cup champion St. Louis Blues.

The Flames celebrated their third ESCHL Tournament championship in four seasons on March 8.