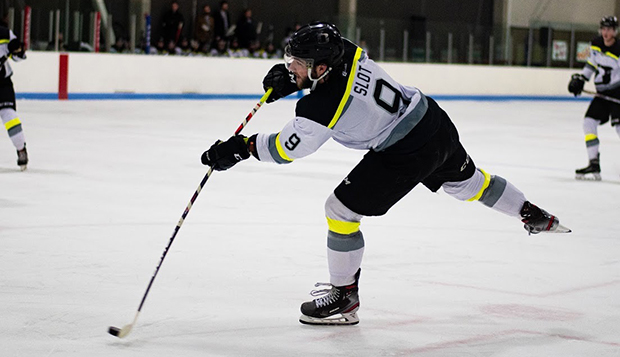 Tristan Slot, a two-way defenseman, scored 10 goals and distributed 37 assists over the past two seasons with the WSHL's Utah Outliers. (Photos courtesy of Bayleigh Schroeder)

"Zak and Matt and I were all pretty close during that season we played together and have stayed in contact over the last year, and I'm super excited to move forward with my career at Liberty," said Slot, 21, who started playing hockey at the age of 4 and hasn't missed a season since. "Bartel has been convincing me for the past couple months, and I think it's going to be a great opportunity for me on and off the ice. I'm really looking forward to this new adventure — to make the journey out to Virginia and have a fresh start and hopefully create my own path."

He hasn't visited Liberty's campus, but may attend the Flames Prospect Camp set for June 11-12 at the LaHaye Ice Center if travel restrictions from the COVID-19 coronavirus are lifted.

Slot can relate to Liberty having its best shot at a first ACHA DI National Championship wiped out by COVID-19, after sweeping top-ranked Adrian College in a late-season home series.

"Our league got canceled before the playoffs, which was my last chance at winning a junior championship," Slot said. "We were in second place in our division and third in the league and had given the first-place team in our division one of its only losses. You could say I'm pretty hungry for a college championship now. I'm hoping I can come in and contribute right away."

A playmaker out of the defensive zone who brings a combination of skill and physicality, he is hoping to challenge for ice time upon arriving for preseason camp in August and establishing relationships with the rest of the Flames this fall.

"Competition within our team will be really high, looking at the roster, and I am looking forward to seeing what the rest of the league has to offer," Slot said. "My two-way game has become a lot more well-rounded at Utah and I am a physical shut-down defenseman who also excels in managing and moving the puck, controlling the pace and the puck."

After consulting with Dr. Kevin Conner, chair of Liberty's residential psychology department, and Anna Stevens, a chair of its online program, Slot is planning to study psychology in hopes of becoming a psychiatrist.

"I have been talking to the chair in email conversations to figure the path I need to take to get into medical school," Slot said. "They've been a huge help for me."

He may be interested in working with athletes recovering from concussion, after his father ended his ACHA career at the University of Houston due to the aftereffects of his head injuries.

"Seeing how that affected his mental health as a whole person, I took a couple psychology classes in high school and found it really intriguing," said Slot, who has sustained two concussions himself over the past four years. "It's just brutal what concussions can do to your brain They have affected my mental health a bit with memory loss but I've overcome a lot of it. I want to help people who have had concussions or are going through hard times in their lives."

He is also intrigued about the opportunity to grow spiritually during his time at Liberty.

"Faith is something that's new to me, and that I am more than willing to pick up and abide by as I have never had that in my life," Slot said. "I am hoping that finding God while I am at Liberty and really making that a part of my life will really be life-changing."

"My mom and dad never really forced me to find religion, so I followed my own path and this is where it has taken me now," he added. "It has led me to Liberty, and I am hoping I find what I'm looking for."