Manchak right at home at LU, surrounded by world changers 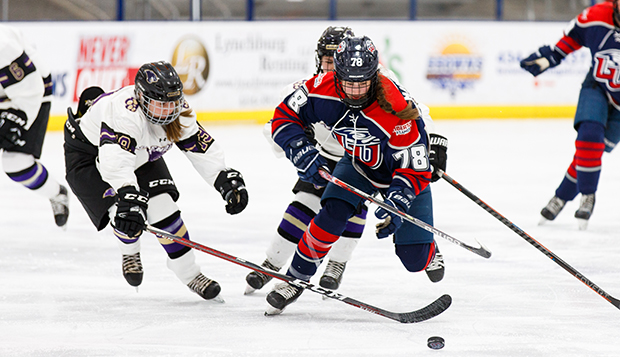 She is a fighter and an overcomer, a standout in the ice rink and the boxing ring, as well as in the classroom and potentially the political arena.

Valeriia Manchak, a graduate student pursuing a Master of Arts in Public Policy, enjoyed a phenomenal freshman season as a forward and leading scorer on Liberty University's ACHA Division I women's hockey team.

The native of Ukraine — who spent last year playing among NCAA Division I prospects from Czech Republic, Finland, Russia, Kazakhstan, and China on the Hockey Training Institute's Elite Stars in Ontario, Canada — was a diamond in the rough of a find for Lady Flames third-year Head Coach Chris Lowes.

"She was a very late recruit for us, the last player to come on board last summer, and she had a great year," Lowes said. "She certainly has been a blessing to our program and Liberty's been a good place for her to grow spiritually. To see her evolution this year was really impressive and next year she has the potential to be one of the dominant players in the league."

Manchak, 23, ranked sixth in the ACHA in scoring with 14 goals and 27 assists in the regular season before adding two goals in a 3-0 triumph over McKendree in the semifinal round of the inaugural WMCHL Tournament in St. Louis. The top-ranked Lady Flames went on to edge No. 2 Minot State, 2-1, in the March 9 WMCHL championship game before COVID-19 canceled the March 25-29 ACHA DI National Championships in Frisco, Texas, depriving them of a chance for a three-peat at nationals.

Manchak said the news that the team wouldn't be traveling to Texas was devastating for the nine seniors, and only a bit less difficult to swallow for the returning players.

"At first, it was like a cold shower because we were mentally and physically prepared for our best tournament ever," she said. "The next day was emptiness and a tough time to get through. And the next day you realize that everything happens for a reason, and we know next year we're going to be better prepared to defend our WMCHL title and win the ACHA championship again."

One of six members of an extremely talented freshman class, and with seven more players committed to join the Lady Flames this fall, Manchak is optimistic about the future of the program.

"This year's rookies are a great class of players who will show all their skills and attributes, personal and physical toughness to lead the team," she said.

Before starting her college journey at age 14, Manchak's career goal was to become President of Ukraine.

Already fluent in Russian and English, she studied law, chemistry, and physics at Yaroslav the Wise National Law Academy in Kharkiv, completing her undergraduate and graduate degrees in criminal justice at 21, by which time her career ambitions had changed.

"I realized that I want to study law and be a prosecutor so I can change laws and stop corruption," she said.

Despite growing up in a single-parent home and in a politically unstable country, Manchak thrived.

"My dad left us when I was 2 years old, but my mom did a great job of influencing me to become a leader," she said. "She taught me that you have to fight for everything under the sun and do the best in everything you do with God's inspiration."

At age 9, Manchak traveled to the United States as the only girl on a Ukrainian boys' hockey team that played in tournaments in Boston, Philadelphia, Connecticut, and New Jersey.

"It was pretty tough being a girl on a boys' team, but I became a leader, even among guys," she said. "It inspired me to be better. I took a lot of checks, but they made me the strong person and athlete that I am."

At age 13, her older brother shifted her passion for hockey to boxing, a sport she exceled in for the next six years. After just three months of training, she won a national championship in the 54-kilogram weight class and nearly went on to qualify to fight for Ukraine at the 2016 Summer Olympics in Brazil.

"Besides the passion and the skill my coaches gave me, they inspired me to be better than I am, to believe in myself and go for the gold," Manchak said.

She returned to hockey at 19, when she was one of three captains to lead Korolevy Dnepra to its first Ukrainian women's national championship.

"I was happy that I inspired girls to make history," she said.

Manchak has equally ambitious personal goals, which include representing the Ukrainian women's hockey team at the 2022 Winter Olympics in Beijing, China.

"It almost happened with boxing and I want to make it happen for hockey," she said. "Dreams come true if you believe in them and Coach (Lowes) sees my desire and supports it. He is always glad to work with me to get better as a player every day. I am trying to improve myself as a student, as a person, and as a hockey player."

Lowes said Manchak's commitment level is unsurpassed among her peers.

"Her desire and commitment for our team to be successful, and her commitment to being at her best so she can contribute in every way possible, is very evident," he said. "She spends extra time in the gym, in the shooting booth, and any extra ice time that she can. She has that love of the game and her results show that.

"She wins battles on the ice because she is just such a good competitor and she brings speed and energy and quickness and a feistiness," he added. "She's an elite player and we needed her because she has so much fire and energy, and she brings that out in her teammates."

Manchak speaks softly but wields a dangerous stick, letting her scoring do the talking for her. She said she is never tempted to showcase her boxing skills on the ice, even when push comes to shove.

"I am good at controlling my emotions on the ice, because a lot of times girls do try to trip me up," Manchak said. "You have to think of the consequences before you do something because serving two minutes in the (penalty) box is not the best solution. Rather than retaliating, I was able to take a step away and show them up by scoring goals."

She is equally passionate about following her post-hockey career path made possible through Liberty.

"I have a dream to change the world in a better way through strategic agencies where I will work," Manchak said. "Only God knows where I'll be tomorrow, and I will rely on Him to help me choose what I want to do."

For now, she is the only Lady Flames Division I player remaining in Lynchburg, due to travel restrictions that prevent her from returning to Ukraine.  She is staying with the family of a friend from Liberty while finishing her spring semester online and rehabilitating from a series of injuries she incurred this season.

"I am happy that I have a family taking care of me and a place to stay, as well as a lot of support from staff and doctors trying to heal all of the injuries that I had," Manchak said. "I am thankful to God that I am around people who I love and are inspiring me and helping me to get better. This is a good time to rethink everything and get prepared for the expectations of next season."

Even in this time of uncertainty, she encourages others to take bold steps of faith.

"Fortune favors the bold, no matter what you do," Manchak said. "We only live once, so we should rely on God … to change the world and inspire others as we tell our story. It doesn't matter where you are, but who you are, and the people around you who share a passion for God and have a great story that will shape the world. I am happy for the environment I am in at Liberty, where I am surrounded by great people in public policy who are going to make changes in the world and make changes in life." 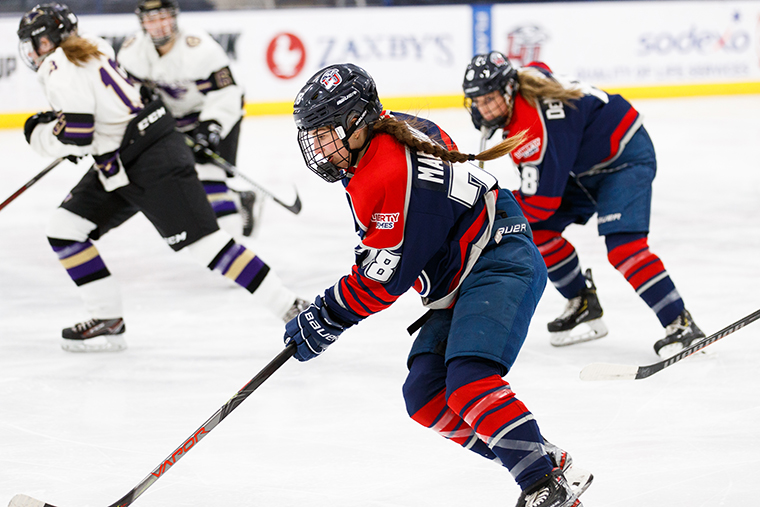 Valeriia Manchak has three more years of eligibility at Liberty, where she could pursue a third master's degree after finishing her second next spring. (Photo by Jenna McKenney)