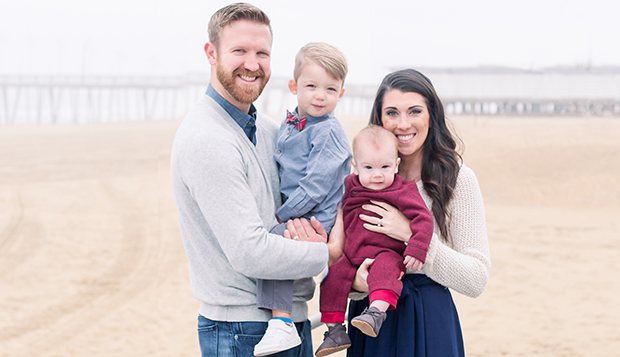 Kevin Snyder and his wife, Morgan, pose with their sons, Harvey and Tate, along the oceanfront in Virginia Beach.

After being raised in Texas and competing in track & field at the University of Oklahoma, Kevin Snyder ('15) pursued his master's degree in sport management at Liberty University while playing on the men's beach volleyball and indoor volleyball teams.

"I was a high jumper at Oklahoma and in volleyball, it definitely helps when you can jump higher than your opponent," said Snyder, who was on the beach volleyball team from the summer of 2013-14 and joined the indoor squad from Fall 2013 through Spring 2015. "We got better each year and finished the best in the program's history at the time, getting into the gold bracket and becoming nationally ranked for the first time. The program has taken off since then and has done really, really well."

Snyder has stayed active in the sport since marrying former Lady Flames beach volleyball player Morgan Jones ('14) in 2016 and settling in Virginia Beach, where he works in pharmaceutical sales. The couple has two boys — Harvey, who will turn 3 in May and Tate, who will turn 1 in June.

"We played in a co-ed tournament last summer and I've played in some indoor tournaments as well," Snyder said. "Some couples can't play together, but we enjoy it. We did it back when we were dating and engaged and married and it definitely helped us in our communication and patience with each other."

He has also stayed in touch with his alma mater, returning to provide analysis on ESPN+ for the Flames' Midnight Mayhem matches streamed live from the Vines Center to tip off the spring schedule.

"I look forward to that night every year and they seem to still ask me back, so I must be doing something right," said Snyder, who earned his undergraduate degree in communications at Oklahoma. "Dreaming about my future back then, I never thought I'd do something like that, but I really enjoy it and it allows me to stay connected with the team — the guys, the coaches and just the volleyball community there in Lynchburg."

He also took part in an alumni indoor volleyball tournament held over Homecoming Weekend this past fall, an event that Head Coach Kaleb VanDePerre is looking to make an annual event.

"I have always been trying to be an advocate for our alumni to get together and play," Snyder said. "It's always fun. I prefer the indoor game, but it's easier to get guys to go play beach because there are less people and you are in the sand, soaking up some the sun. It's always a good time."

"We had a couple tournaments down here at Virginia Beach, which is like Lynchburg in that there is a pretty tight volleyball community," Snyder said. "When we were playing here, we would always see the same people and develop relationships through playing together."

"We had a good run," Snyder said. "We won a couple tournaments and went far down in Florida."

An active member of Liberty's Varsity Club, Snyder worked for a year and a half as an operations supervisor for Club Sports, facilitating different teams' events, and announcing a few men's lacrosse and men's and women's hockey games. He also helped to run the Midnight Mayhem volleyball match in 2016, working alongside Morrison, then Club Sports director of internal operations, and VanDePerre.

Besides meeting Jones, which was "definitely a highlight" of his time at Liberty, Snyder grew personally and spiritually over his three-plus years on campus.

"I got to develop my leadership roles since I was an older guy and a team captain," he said. "I didn't have the years of experience of playing the sport, but people were still learning to follow me as a Big 12 athlete and I was able to mentor the younger guys and show them what it takes to win, what it takes to compete day-in and day-out."

He developed in his own spiritual walk and built relationships not on sandy ground, but a hard-court foundation of faith.

"I appreciated the spiritual growth during my time at Liberty and really appreciated how everything was centered around and focused on Christ," Snyder said. "It definitely prepares you for life outside of sports, outside of college, and just figuring out what's most important — to have a foundation in Jesus."

Being a two-sport collegiate student-athlete and a two-time team captain were bonuses on his resumé to potential employers.

"They know that we work hard, that we balance our time between practice and travel and studies and career, and that we have developed some leadership skills and will be good, young professionals," Snyder said.

His competitive nature cultivated through sports has helped him rise above the crowd in his profession, even amidst the COVID-19 crisis.

"Thankfully, I'm able to work from home and still have a job," Snyder said. "It is nice that the pharmaceutical industry is pretty resilient. That has allowed Morgan to be a stay-at-home mom and raise our boys. That's been a huge blessing for us.

"I have a lot to be thankful for and don't take that for granted because I know so many people are hurting at this time," he added. "There is a lot of uncertainty, anxiety, and fear, and if you're not careful, you can let those things overrun your life. Thankfully, we serve a God who wants to hear from us and help us and we can take our cares to Him." 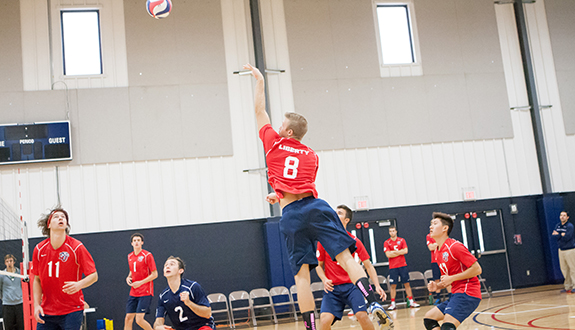 A left-handed hitter, Snyder was a dangerous weapon from anywhere on the court in his two seasons with the Flames' men's indoor volleyball team. (Photo by Les Schofer)