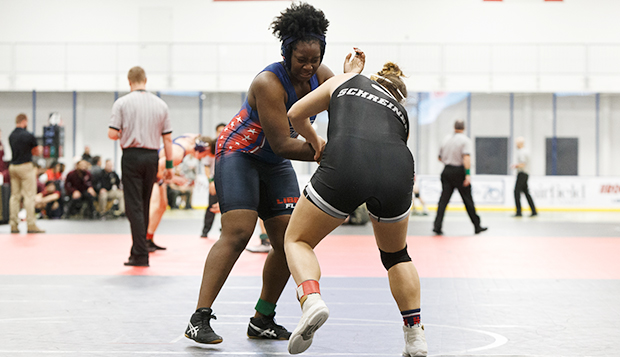 First-year Head Coach Josh McIlhenny was relieved his team had the opportunity to showcase their skills under the national spotlight with the majority of sporting events wiped out by the COVID-19 coronavirus.

"Cleary, with everything going on, so many national tournaments were canceled, so many professional leagues were canceled, so just because something is on your schedule, doesn't mean it's guaranteed," McIlhenny said. "We got the opportunity to wrestle, which was just so exciting, and the girls had the best attitude about it. I thought we wrestled great all across the board, from 116 (pounds) all the way up to 235. I was really proud of the girls to come out here and to wrestle on such a big stage."

"Catherine claimed her All-American status for the first time in her career," McIlhenny said. "She had wrestled in this tournament three times, so to see her punch through was awesome. To end the season on a positive note was so good for her. I know how hard she's been working. To see her achieve her goals was awesome."

Wooten was inspired by watching the Manley sisters compete before her on the center stage.

"I was probably stressed out the most, even though I went last (in the finals)," Wooten said. "Everyone else just had a great attitude. They were pumped, they were ready, they didn't let their nerves get to them. This was just a great learning experience for everyone because you're not going to win every match. All the girls did moves that they've been practicing all year. They just came out and did their best and I couldn't be more proud."

"To see Kyndra, a first-time All-American, in the finals was also super exciting and encouraging, just to see the product of what this program can produce," McIlhenny added. "A lot of our girls never wrestled at all in high school. They started wrestling in college, so to have them start here and make the finals was pretty awesome."