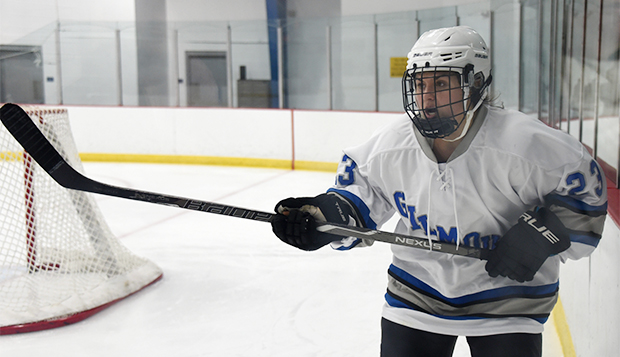 Linzy Jedrzejek played the past three seasons for the Gilmour Academy team and is completing her associate degree.

The 5-foot, 4-inch forward, who can also play center or wing, is currently in her third season at Gilmour Academy after previously playing for Pens Elite as a sophomore.

After graduating from high school last spring, Jedrzejek is currently taking college classes and will complete her associate degree in May. She plans to pursue a B.S. in Public Health — Health Promotion at Liberty.

"We are excited to be adding Linzy to our incoming class for next season," Lady Flames Head Coach Chris Lowes said. "We have been talking with Linzy since before Christmas and were fortunate to have her come for a visit back in February. Linzy fit in great with our players and matches what we are looking for in a student-athlete."

She was impressed with the faith-based education at Liberty and atmosphere fostered by faculty and students on campus as well as the professional approach by the Club Sports coaches and staff at the LaHaye Ice Center, where the top-ranked, two-time-defending ACHA DI national champion Lady Flames (26-2) finished undefeated (14-0) this season.

"I chose Liberty because it's the perfect combination of everything I wanted for my college experience," Jedrzejek said. "Liberty stands strong in both faith and academics and that was something I was looking for during my college search. Along with that, Liberty's hockey program is built on a strong foundation and something that I wanted to be a part of."

Jedrzejek describes herself as a smart hockey player who is able to read plays as they unfold on the ice. She is also a physical player adept at grinding along the boards to battle for loose pucks and is confident she will bring intensity and positivity to the team. She is looking forward to improving her game on and off the ice and, even more importantly, growing a close bond with her teammates and coaches.

Lowes said Jedrzejek made a positive first impression on the Lady Flames' players and coaches.

"One thing that stood out immediately was her maturity," he said. "She did not carry herself like a lot of perspective players, (instead) showing confidence both on and off the ice.  I think she will transition to the college environment quite easily."

"Linzy is versatile as a player, and can fill a number of roles for us – as a winger or center," he added. "She seems to have a high hockey IQ and awareness on the ice and I am excited.  On the ice, Linzy is similar to (senior forward) Aly Morris in a lot of ways, which is a great compliment.  I am excited to see her come in and compete for us and to have her here on campus this fall."