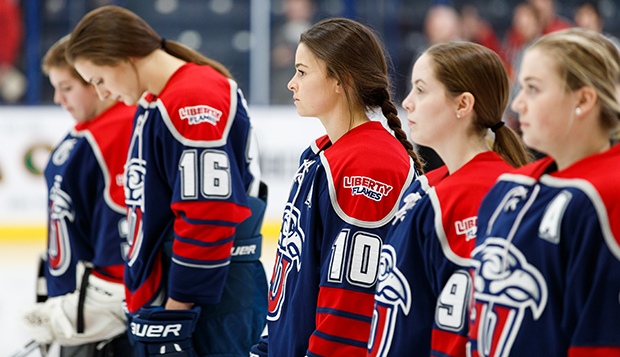 Though Liberty University's ACHA Division I women's hockey team was denied the opportunity to "three-peat" as national champions, when the ACHA DI National Championships scheduled to start today in Frisco, Texas, were canceled by COVID-19, the Lady Flames (26-2) ended their season on a winning note by claiming the inaugural Women's Midwest College Hockey (WMCH) Tournament title, March 7-8 in St. Louis.

That event could almost be considered the national championships as all six teams in the first-year conference landed in the top 10 in the final ACHA DI rankings, topped by Liberty, which maintained its No. 1 standing for all 12 ranking periods.

Rupoli finished with an ACHA-best 0.75 goals-against average and 96.2 save percentage as well as a program-record 20.5 career shutouts. She split her second-to-last shutout with freshman Kayla Savoie-Penton in the second game of a regular-season-ending sweep at No. 4 Adrian, a rematch of the 2018 ACHA DI National Championship final, the team's second in four years and first under third-year Head Coach Chris Lowes.

The Lady Flames had a chance to bid farewell to their fans, including a strong contingent of families who traveled long distances for their final regular-season home games at the LaHaye Ice Center on Jan. 29-Feb. 1, a sweep of WMCHL foe McKendree.

"It was emotional, the last time going out with these girls in Lynchburg," Morris said. "It's a big group of us so it's like a family and I feel like we have a big part on this team along with everybody else. We're thankful for Coach Lowes, keeping us all together. Our coaching staff (including assistant coaches Justin Forth, Leah Carlson, and Madison Pinel and Video Coach Josh Graham) is amazing."

"It's bittersweet," DeMerchant added. "It's exciting knowing that we are coming into the last leg of the season … but it's definitely sad to be saying goodbye to a home rink that's quite nice and really gorgeous facilities that you don't really get a lot of other places in the nation."

She enjoyed playing on the same line as Smibert and 2018 ACHA Tournament MVP Shelby Bradford, one of six rising seniors for next season including Manchak, the team's leading scorer from Ukraine.

"Honestly, I wouldn't really say that we have a definitive top line," DeMerchant said. "All of our lines are pretty balanced and have the ability to produce on both ends. Our lines are changing all the time, but Alex and Shelby and I have been together for quite a few line combinations throughout the four years. We're getting pretty comfortable with each other and confident in what we can do and just kind of knowing where each other are on the ice."

While the Lady Flames' seniors never had the chance to contend for a fourth national title in six seasons, they grew so close as teammates that they will be forever friends and Champions for Christ, fully equipped to overcome any obstacle in their paths to change the world for good.