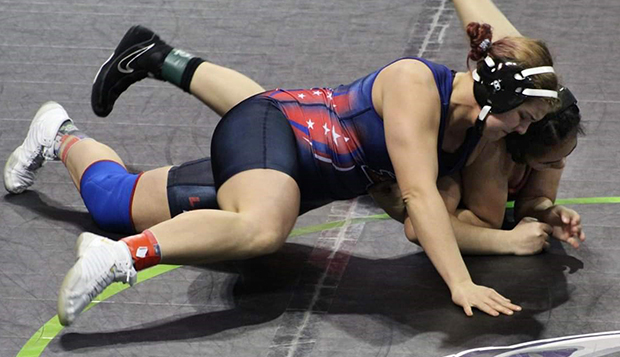 It has been nearly 40 years since Jesse Castro — Liberty's 15th-year men's wrestling head coach and third-year women's associate head coach — became the Flames' first student-athlete in any sport to accomplish the feat. He won the National Christian College Athletic Association (NCCAA) 142-pound title from 1977-79 and again in 1981 after redshirting his senior season with a knee injury.

With her parents, Liberty alumni Randy and Louise Manley ('87), and younger brother Caele Manley, a sophomore wrestler at Wheaton (Ill.) College, in attendance, Cendall Manley won in dominating fashion, by 6-0 decision over Schreiner University's Megan Thomas in the 155-pound final. She didn't realize she was only the second four-time women's champion in NCWA Grand National tournament history, and the second four-time national champion at Liberty.

"(Coach Castro) didn't want to put any extra pressure on me, but he was really excited I was able to join him," said Cendall Manley, who was named the women's tournament's Most Outstanding Wrestler. "He hugged me and said, ‘Welcome to the club.'"

"With Cendall being the one who initially started (the women's program) four years ago, that was pretty cool," Castro added. "I was really happy for her. Absolutely, that was a great performance and quite an accomplishment."

She and her older sister, second-year graduate student and defending national champion Charisse Manley, recorded two pins en route to their respective finals, wrestled on the center mat as two of the women's tournament's featured matches.

"I think it was the Lord's timing, a perfect situation for her," said Charisse Manley, who was seeded second and lost her 136-pound final by 4-2 decision to Big Bend Community College's top-seeded Aliyah Yates. "It was definitely a battle from the moment it started to the moment it ended. It didn't end up the way I wanted, but I can say with full confidence that I gave everything I had for seven minutes."

"They both wrestled really good finals matches, honestly two of the most exciting women's matches of the tournament, so it was very fitting they were both on the center stage," Lady Flames Head Coach Josh McIlhenny added.

Throughout the weekend, Cendall Manley reflected on her collegiate wrestling experience at Liberty.

"It was an amazing (tournament) to really fully capture what this whole four-year journey has been like," she said. "It truly parallels my spiritual walk and this wrestling team has helped mature me as a woman of God, to be able to go out there and represent Liberty and Christ and my team. To wrestle alongside my sister and to have my dad — who was our coach all the way from elementary through high school in Hawaii — in the crowd for my last match, everything kind of goes full-circle."

Randy Manley wrestled for Castro — then an assistant under Head Coach Bob Bonheim — in the mid-1980s before completing his B.S. in youth ministries. While pursuing a doctorate in apologetics, he serves as pastor at Moloka'i Baptist Church, where he and his wife also operate a mission to native Hawaiians.

"Our dad uses wrestling as a way to reach people for Christ and train young people in a lifestyle worthy of Christ — in discipline and character building," Cendall Manley said. "We have tried to emulate that in our approach to working with the team. It's all about bringing glory to God and being women of godly character."

He visited Liberty in early January to conduct a two-day clinic, providing the nine Lady Flames wrestlers instruction as well as encouragement and prayer — "Whatever the girls needed to be successful," Cendall Manley said. "It was inspiring to have him there at nationals, where he was able to give the girls advice between matches."

The Manley sisters have been instrumental in establishing and strengthening the Lady Flames' fledgling program over the past four seasons. Cendall won her first championship in 2017, the year before there was an official team. Charisse joined her at Liberty last year and took up the mantle in serving as a student leader, or Kumu, a Hawaiian word for teacher.

"Charisse ran all of our practices, six days per week, and did an amazing job," Cendall Manley said. "She makes sure we all know how to wrestle and are competition-ready. She had a ton of responsibilities and handled it with such grace and leadership."

A former competitive cheerleader at Azusa (Calif.) Pacific University, where she studied elementary education, Charisse Manley will complete her master's in marriage and family counseling this spring.

"It was definitely the best two years working alongside my sister and developing this program," Charisse Manley said. "It has been an amazing experience. It has had its ups and downs and it's been a journey, but the Lord has been with us every step of the way. I know He's brought us to this place for such a time as this. It's a family environment and we've created friendships through this sport that will last a lifetime."

McIlhenny said this year's NCWA women's tournament was larger and more competitive than ever before. He expects the Lady Flames to keep pace with that trend when he brings in Liberty's first recruited class this fall.

"It is really encouraging to see the growth the program has had in three years of existence," he said. "Last year, we only brought four wrestlers (to nationals) and this year we had four All-Americans (for top-four finishes), so it is exciting."

Cendall Manley, who will graduate with a degree in psychology: counseling, expects the team's success to snowball as the sport gains popularity.

"We're hoping the program will continue to grow and excel and attract more women," she said. "We are really prayerful and excited about what the future holds. Women's wrestling in general is on the rise throughout the country and we're really excited to see Liberty be a part of that."