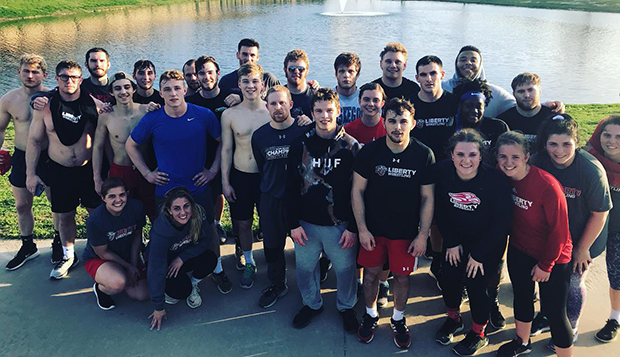 A total of 19 Liberty men's wrestlers and nine Lady Flames women arrived in Texas on Monday and currently sit in first and fourth place in the NCWA Grand National team standings.

After advancing 14 of 19 wrestlers through to the championship quarterfinals and seizing a 14.5-point lead on Mid-Atlantic Conference rival Apprentice School on Thursday's opening day of competition in the NCWA Grand National Championships, Liberty University's men's wrestling team expanded its advantage to 78 points on current runner-up Springfield Tech Community College by the end of Friday night's action at the Allen (Texas) Event Center.

For the first time in tournament history, the Flames — who sent a program record eight wrestlers into Saturday's championship finals — have already clinched their third consecutive team title and fourth in six years following the second day of competition. Liberty has racked up 199 points to distance itself from Springfield Tech (121), Grays Harbor (115), Apprentice (104), Central Florida (84), East Carolina (83), and Grand Valley State (68.5).

The tournament field was already much smaller than anticipated due to teams opting not to travel out of concern over the spread of the COVID-19 coronavirus, which on Wednesday was deemed a pandemic. On Friday, the competition thinned considerably, with wrestlers being eliminated and others, including complete teams from Apprentice, the two-time reigning runner-up based in Newport News, Va., and Grand Valley (Mich.) State, another strong contender, being forced by their administrations to return to their home campuses.

"Our guys are wrestling really well, but it's kind of anticlimactic without Apprentice and Grand Valley, who were required to go home," Flames Head Coach Jesse Castro said. "It's a weird feeling, to be honest. It's surreal. We're excited for doing as well as we are and there are going to be some really good final matches, but it is kind of anticlimactic in that sense."

Castro said the tournament may be one of the only sporting events in the country still being waged, even in a competition that involves more physical contact than practically any other sport.

"I actually am kind of proud of the NCWA," he said. "It is bold of them to go against the tide like this. They are confident that they are doing everything according to the CDC (Centers for Disease Control and Prevention) to keep wrestlers safe, by implementing sanitary policies and procedures."

Crowd sizes are a bit smaller than average, and brackets for the 11 weight classes range around 40 wrestlers rather than close to 60 as is the norm.

At 165, Liberty is guaranteed an individual champion and a runner-up as the final will pit junior Joe Scott — who advanced by 18-1 technical fall over Grays Harbor's Desmond Bowers — against sophomore David Cox, who won by 16-0 tech fall over Pacific Lutheran's Max-Henry Nelson.

Senior 174-pounder Cody Richmond reached his first national championship final by receiving a forfeit from Apprentice's David McElvavy after recording his third pin of the tournament, over Grays Harbor's Andy Gonzales 4 minutes and 31 seconds into their quarterfinal bout.

Two-time defending national champion Austin Amos returned to the 197-pound final with a 8-0 major decision over Ohio State's Kyler Slade in a battle between now four-time All-Americans. Before Liberty freshman Blake Barrick was sent to the consolation round with an 11-4 semifinal setback to the Buckeyes' Eldar Muradov.

Flames freshman heavyweight Rick Weaver, who recorded two falls on Thursday, picked up where he left off in Friday's quarterfinals, pinning Dixie State's Jantsen Manis in 7:36 before reaching the finals by decking Mott Community College's Lance Clapp in 2:05.

"The girls are likely to challenge for a top-three team finish, even though there are double the number of teams in the women's division from last year," Castro said.