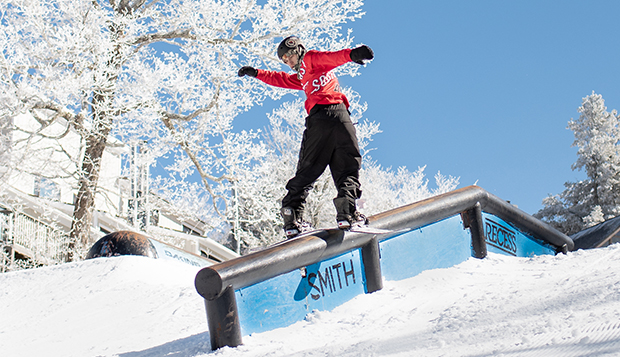 Freshman snowboarder Coleen Leja captured her second individual USCSA National Championships gold medal — and the second in the history of Liberty University's ski & snowboard program — to lead the Lady Flames to a third-place team showing in Friday's women's Slopestyle competition on the fourth and final day of freestyle competition on Whiteface Mountain at Lake Placid, N.Y.

"It was a huge national championship for us, especailly on that female snowboard side of things," Liberty Head Coach Isaac Gibson said. "I am really excited for those girls because a few of them are freshmen and they're only going to be going up and getting better from here. I am excited to see what they're able to do next year."

Freshmen Emory Orlando and Sam Pesile, both new to freestyle snowboarding at the start of this season, finished 15th and 18th, respectively, in Friday's slopestyle, but Orlando nearly landed a trick that would have put her in the top three, according to Gibson.

"The Liberty Mountain Snowflex Centre was a huge resource for them and with six months of training there they were able to take it a long way," Gibson said. "The week before nationals, we had the Air Bag running and (Orlando) learned backflips on it. She had never performed the trick on snow, but at nationals, she came so close to landing it over one of the jumps. No other female athletes were attempting any type of flips and that would have given her a huge separation on the field and put her on the podium."

In the freestyle individual combined standings, Leja was also awarded a gold medal with six points — factoring in her fourth-place showing in Wednesday's women's boardercross event — keeping her in front of Westminster's Olivia Shively (eight) and Madison Barrett (13).

"We were able to get four of our five riders qualified into the final event," Gibson said. "Conditions were certaily not ideal, as the snow was really slushy and riders struggled to get enough speed to perform the tricks they really wanted. Because of that, people were falling after coming up short on the jumps. We played it safe on the first runs, just to put down some scores, and on the second runs were a little more risky."

On Wednesday night, Rice improved on his third-place men's snowboard Rail Jam performances in 2017 and 2019 by landing a score of 28.5 on his finals run to finish a close runner-up to Sierra Nevada's Alex Schoff (29.0). Other Flames in the top 10 were sophomore Tanner Hoffarth (seventh, 18.5), Mast (eighth, 18.0), and junior Owen Hewitt (ninth, 17.18). Liberty also placed third in the freestyle combined team standings behind Westminster and Sierra Nevada.

After originally being moved to Saturday due to poor conditions, Thursday's men's and women's ski Slopestyle events were eventually canceled. New York suspended all large crowd gatherings throughout the state at 5 p.m. Friday in an attempt to limit the spread of the COVID-19 coronavirus.

"On Thursday, (USCSA organizers) announced they were canceling all of the award ceremonies, and today they announced they were canceling the skier slopestyle and all of Saturday's alpine events," Gibson said. "That was a really big disappointment to the athletes and the organization, but at the end of the day, it is just a silly contest and not the end of the world."

The site of next year's USCSA National Championships has yet to be announced, but Gibson is confident it will be held in Northern California for the first time.