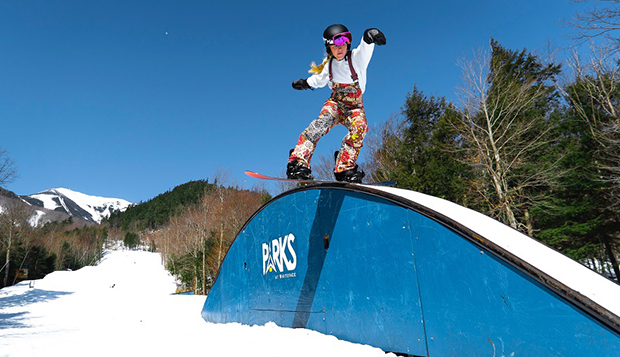 "She's had years of experience snowboarding since she was a young girl riding in Michigan and … an incredible amount of repetition there," Head Coach Isaac Gibson said, noting that she continued that progression through practices at the Liberty Mountain Snowflex Centre's terrain park. "Rail Jam is definitely her strongest event and it is very clear to see when you watch her ride that she feels very comfortable on her board and it certainly paid off for her at the USCSA Nationals."

"The big one that secured it for her was her 50-50 on a flat rail to a gap transfer 50-50 onto a downrail separated by about five feet," Gibson said. "There were no other girls in the contest that even attempted that trick."

Leja scored 33.3 points for her final run for a total of 100 points that gave her a 20-point cushion in the final individual results over Westminster College's Alinnea Christensen (80). Liberty sophomore Sam Pesile (32) placed eighth and freshman Emory Orlando (24) 11th to help the Lady Flames (156 points) finish runner-up to Westminster (170) and ahead of third-place Sierra Nevada (94) in the team standings.

In the women's Boardercross event, Leja was the only Liberty finalist and finished fourth individually with 50 points to put the Lady Flames in fourth place in the team standings. Orlando also made it to the first round of heats before being eliminated.

"That was another incredible finish for Coleen in an event we haven't been able to practice this season," Gibson said. "I'm really excited for and proud of her."

In the women's ski event, sophomore Taylor Keeran placed fifth individually with a total of 45, followed by freshman Meg Weigner (ninth, 29), junior Jenna Suskie (11th, 24), and sophomore Elizabeth Croley (12th, 22), who suffered a hard fall in the finals. Combined, the Lady Flames scored enough points to finish runner-up to Vermont (212) with 103 points, ahead of Colorado Boulder (76) and San Diego State (60).

"She definitely loves riding fast and doing the jumps and has another great opportunity to get in the top five," he said.

That set the Flames snowboarders up for a potential first team championship finish after Gibson was a member of one of two men's teams to place as high as second in program history. He was joined by his future Assistant Coach Kevin Hoff on the Rail Jam runner-up team in 2014, also held at Lake Placid.

In Tuesday's men's boardercross, junior Tyler Wilson advanced to the second round of playoff competition to lead the Flames to a fifth-place team finish with 47 points, behind Westminster (230), James Madison (89), Sierra Nevada (68), and Cal State Long Beach (60). Sherbine and Rice also made it to through the preliminary heats, but were knocked out in the first round.

Gibson said conditions have become more favorable as the week has progressed.

"It was raining (on Tuesday), so it was pretty sloppy, but today it got much colder, so the snow was harder packed and icy," he said. "That's not ideal, but not the worst conditions. The riders have been able to work through it and still perform well and it's certainly paid off."