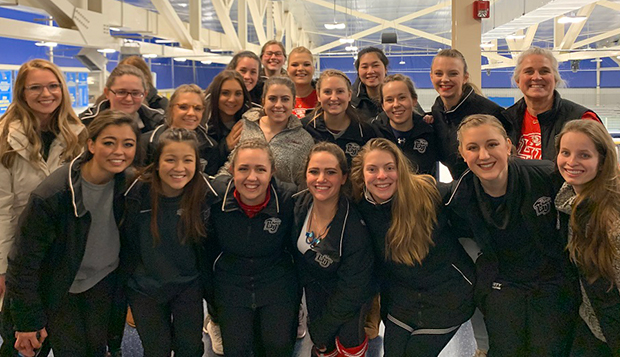 "The team had a great weekend … with lessons learned while competing and the relationships that were strengthened on the road," said Head Coach Dawn Harter, who will travel with Associate Coach and Synchronized Skating Head Coach Tatiana Payne and 18 of their skaters to nationals.

Prior to Saturday's and Sunday's skating events, the Lady Flames had an opportunity to encourage high school student "street leaders" at an inner-city youth ministry, Urban Promise. After joining them for a pizza dinner, freshman skater Sarah Yoder shared her life journey that inspired and encouraged many of the students and ministry directors.

"She has had severe medical issues that have caused her to lean in towards God and strengthen that relationship," Harter said. "We hope to return to Urban Promise in the future. Overall, it was a God-appointed visit, and not only were we able to bless the street leaders and directors, but they in turn blessed us and encouraged us."

Then, on the ice, sophomore Abbie Steelman experienced a sensational weekend, finishing first in both her Intermediate short program and her freeskate program. Senior Jill Holste placed first in the solo preliminary dance pattern, followed by freshman Marissa Harter in fifth and junior Haley Gram in seventh. Gram also captured second place in her Juvenile freeskate.

The Lady Flames solidified their second-place standing after hosting the first Eastern Sectional on Feb. 16 at the LaHaye Ice Center. They finished ahead of Carnegie Mellon (86), Penn State (83), Princeton (66), Pittsburgh (64), and 10 other schools n the competition.