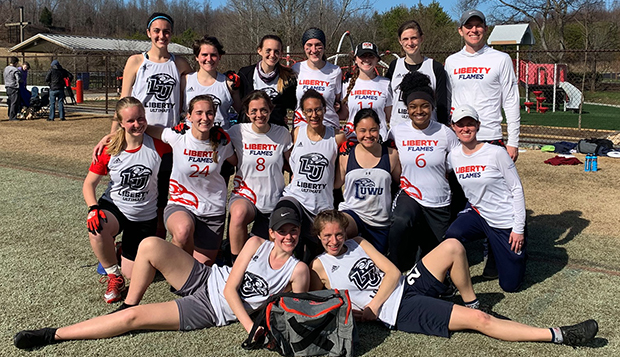 "They had a really good deep threat and were ripping it deep to her the first time we played them," Lady Flames Head Coach Jonathan Mast said. "Our defense was lackadaisical and our offense was struggling, but with the adjustments we made on offense and defense, we stomped them on Sunday and we were confident that we could. That was our best game of the tournament and season, to win the way we did."

The Lady Flames overcame an early 2-0 deficit by turning to their own deep passing targets.

"We started off rocky … but collected ourselves, adjusted, and fought back, taking a 7-5 lead by the end of the first half," Mast said. "Our deep game was on point and we kept up the momentum all throughout the second half … to secure the tournament win."

The Lady Flames had won Saturday's first round of pool play against seventh-seeded Rhode Island, 13-4, before topping second-seeded Cincinnati, 9-5. They then beat fifth-seeded SUNY-Fredonia, 9-3, before doubling up third-seeded Vermont, 10-5, and completing pool play with a 13-3 triumph over sixth-seeded RIT.

"These teams were totally out of our region and typically lower nationally ranked teams go to this event," Mast said. "We were the highest-ranked team there and we ran even lines to get our rookies and players who aren't playing as many points more reps in order to increase our depth down the road."

"The main emphasis going into the weekend was trusting each other and the system we had implemented," he said. "We divided the team as evenly as we could and didn't play our starting seven after the first minute of the games and it was an invaluable experience for our younger players."

Complete results are available on the USA Ultimate website.

Previously, the Lady Flames finished fourth out of 21 teams at the Feb. 15-16 Commonwealth Cup in Axton. After going 2-1 to finish in a three-way tie for first in its pool, Liberty, seeded seventh, upended No. 11 Connecticut, 8-6, in the first round of bracket play before upsetting sixth-seeded Boston, 10-9, to reach the semifinals. The Lady Flames lost to fifth-seeded Ohio, 12-2, and top-seeded JMU in the third-place game, 13-5.

Liberty will return to Axton for the March 28-29 I-85 Rodeo, which will feature more than 20 teams and considerably stiffer competition.

"We'll be ranked in the middle of the pack with teams such as Penn State and North Carolina in the field and we are really looking forward to that," Mast said.

Then on April 17-18, the Lady Flames will try to qualify for a seventh consecutive Mid-Atlantic Regional berth with a top-four finish at the Virginia Conference Championships hosted by JMU in Harrisonburg, Va.