Curry clinches another first-place finish with putt at Clemson 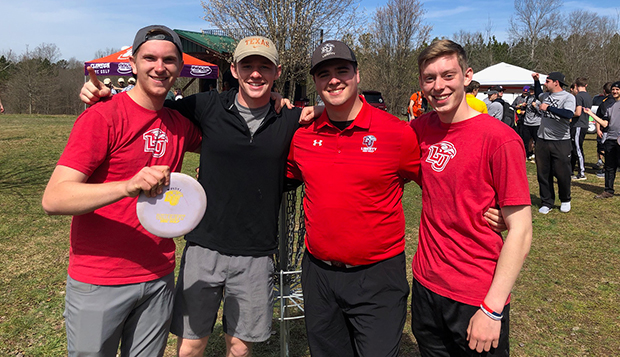 The Flames had edged the host Wolfpack by one stroke on Curry's 40-foot putt on the 18th hole at the Feb. 2 qualifier in Raleigh, N.C.

At Clemson, Curry placed eighth individually with his 4-under-par round of 64 to pace the Flames, followed by sophomore Pete Curran (seven-way tie for 13th, 1-under 67) and senior Dustin Barrett (24th, 1-over 69).

The top three teams all birdied the first playoff hole before Liberty and North Alabama shot 3s on the second while NC State fired a 4, sending Liberty and UNA to a third hole tiebreaker. Flames freshman Justin Rosak's tee shot landed within 20 feet of the hole, setting up Curry's dramatic shot.

Meanwhile, in the women's competition, Lady Flames seniors Shannon Hons (92), Hannah Miller (98), and Anna Luff (100) finished fifth, sixth, and seventh, respectively, out of nine players. The trio led Liberty to a runner-up team finish behind Kennesaw State and ahead of Clemson.

The event was the last tournament for the Flames and Lady Flames before they travel to Rock Hill, S.C., for the April 1-4 College Disc Golf National Championships. Liberty's Championship Flight men placed a program-best third at last year's tournament and its First Flight quartet earned a team title.