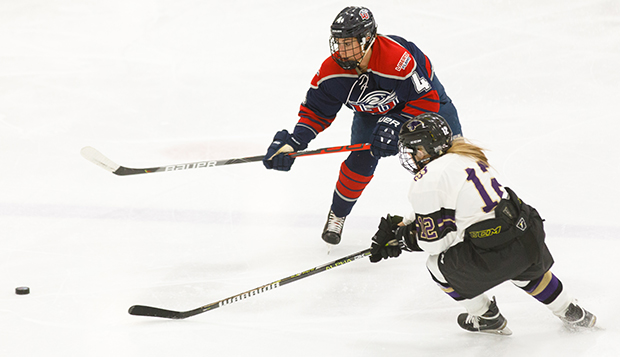 Senior forward Alex Smibert received the puck off a quick restart at center ice and skated into the left circle before burying a wrist shot into the upper netting with 16.7 seconds remaining in regulation. Her third-game-winning goal of the season lifted Liberty University's top-ranked ACHA Division I women's hockey team to a dramatic 2-1 triumph over Minot State in Sunday afternoon's inaugural WMCHL Tournament championship game at the FSI Sharktank in St. Louis.

"It was what we expected from a good team, a good, low-scoring defensive game," Lady Flames Head Coach Chris Lowes said, noting it was not unlike Saturday's 3-0 semifinal win over McKendree. "We created some chances, but they did a good job of cleaning things up around the crease."

The two wins locked up Liberty's No. 1 seed going into the March 25-29 ACHA DI National Championships in Frisco, Texas, where it will face eighth-seeded Colorado in the best-of-three quarterfinal series.

"We were happy to have the win and the girls celebrated it," Lowes said. "That was one of our three big goals on the season, with the first to make it to nationals and the last to win it. It was fun to play a team we hadn't played before and we were glad with the way the first-year league worked out and happy how the tournament played out as well."

Moments after freshman goalie Kayla Savoie-Penton stopped an open shot from point-blank range in front and a penalty put Minot State (18-4-1) on the power play, the Lady Flames (26-2) capitalized on a steal for a shorthanded goal by Shannon Fehr assisted by fellow junior forward Shelby Bradford for a 1-0 lead 7:13 into the second period.

"That was a nice little two-on-one play off a turnover in their zone," Lowes said. "It was a nice pass by Bradford and Shannon was able to gain control and put a short-side shot just over the goalie's pad."

Late in the second period, Savoie-Penton made another clutch save, denying Minot State on a two-on-one counterattack. But the Lady Beavers manufactured the tying goal with 6:18 remaining in regulation by capitalizing on a two-on-two rush, with forward Sami Jo Henry finishing a fast-break feed from Mackenzie Balogh with a shot that went through the Lady Flames defense and the five hole.

"We were in control for a while, but then it was a pretty good hockey game, back and forth," Lowes said. "After they got their goal there in the third, we (coaches) were gearing up for overtime, but I loved the girls' answer. Their goal didn't deflate us; it lit a fire."

"The last five minutes (were) really good hockey and Smibert scored a real good goal after a turnover in the neutral zone," he added. "The puck took a weird bounce to Alex and she had time to load up and hit her spot."

As much as there is a Canadian influence on Liberty's roster, with 18 out of 23 players coming from north of the border, the Lady Beavers, based in Minot, N.D., feature even more. A full 20 of their 22 players are of Canadian descent, with the other two from North Dakota.

They will be two of the favorites when the top eight teams assemble near Dallas.

"We've both got a lot of work to do (to earn a rematch in the finals)," Lowes said. "They won a really good semifinal contest against Lindenwood-Belleville, 1-0, that could have gone either way. Nationals is setting up to be very competitive and should be very exciting. Like last year, we have a very big target on our back and winning this makes it even bigger. We have been building rivalries with other teams, who want payback, including Minot." 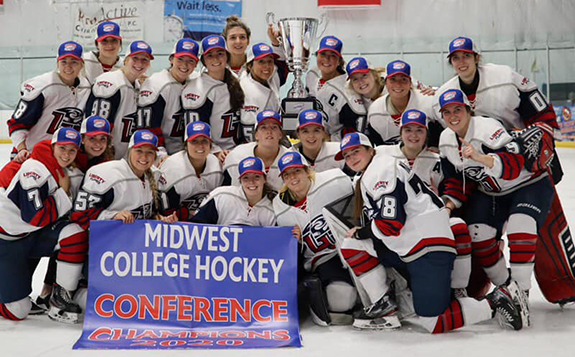