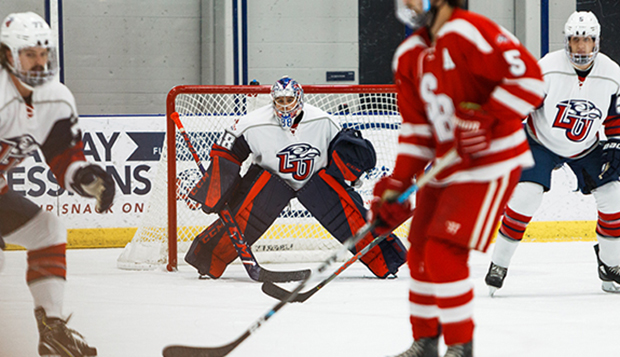 Liberty University's ACHA Division I men's hockey team, ranked second in the nation and seeded first in the ESCHL Tournament, lived up to its billing in Saturday's championship showdown with Stony Brook at the Ice Line Quad Rinks.

The Flames opened a 2-0 lead in the first five minutes and freshman goalie Cédric Le Sieur posted his first shutout as Liberty (33-4) cruised to a 4-0 victory over the Seawolves (21-10-1).

"Cédric Le Sieur had a phenomenal game," Flames Head Coach Kirk Handy said of the ESCHL Tournament MVP. "He played great tonight, made some big saves and timely saves, and battled all night for us."

"We were real proud of our guys tonight," Handy said. "They played very well and rebounded from a game (Saturday) night where all the guys knew that wasn't the type of effort we needed. Stony Brook is a tough team and we had to battle all night. We had a great focus on what we were doing and the guys came to play tonight. They worked hard for 60 minutes and it made a big difference."

For the second time in the four seasons the Flames have competed in the ESCHL, they captured both the regular-season and tournament titles and now have won three out of four of both. Before joining the league, Stony Brook was the four-time defending tournament champion and looked to regain that status on Sunday.

But Liberty had other plans. Just 1 minute, 45 seconds after the opening faceoff, senior forward Ryan Cox netted his first goal of the season at an opportune time. On the second shot of the game, he gave the Flames a 1-0 advantage off a two-on-one break through the left circle, finishing feeds from senior forward Victor Blomberg and freshman defenseman Dmytro Kobylyanskyi with a sneaky wrist shot past Seawolves goalie Sean Keating.

"I like the way we started the game," Handy said. "We came out with a more determined effort at the start and it carried over into the rest of the game. Cox is a guy who's a big part of our team and who does a lot of things right for us. He plays with the type of determination we need and leads by example in that locker room."

Le Sieur withstood the Seawolves' first serious threat at around the 12-minute mark, sprawling in multiple directions to block a barrage of shots from different angles.

With 14:14 left in the second period, Kobylyanskyi maneuvered the puck around a Stony Brook defenseman in the high slot and fed it to sophomore forward Matt Bartel in the left circle where he sent an entry pass into Fricks for a short-range finish through the five-hole that stretched Liberty's lead to 3-0.

Later in the period, crisp passing set up a shot in the slot by freshman forward Brett Gammer, gloved by Keating, before senior forward Quinn Ryan had his shot from the high slot tipped over the net and Keating blocked Fricks' shot from the point.

On the other end, Le Sieur rejected three successive shots from in the right slot, the last off the stick of Devon Palmieri who was stationed right in front. Then, with less than five minutes left in the third, Le Sieur made his 33rd save, repelling a shot by Dustin Rinaldo, who had scored four goals against NYU.

"A key point in the game was when we were up 3-0 and they had a 5-on-3 power play and our guys dug in and killed off that penalty," Handy said. "They battled all night and did whatever it took to keep the puck out of the back of the net."

The Seawolves pulled Keating with 4:02 to go and Liberty quickly cashed in as freshman forward Colin Baird cleared the puck out of his own corner and it rolled on its edge along the boards before steering all the way into the Stony Brook cage for a 4-0 advantage with 3:43 remaining in regulation.

"Colin's reliable and dependable, a guy who you know what you're going to get, so that was a nice reward for a guy who has been a rock back there on the D corps," Handy said.

Liberty outshot the Seawolves 43-34. Both teams will represent the ESCHL at the March 19-24 ACHA DI National Championships in Frisco, Texas, and would meet in the third round if they both win their opening games.

"It's huge," Handy said. "Years ago, when we were looking to get into a conference, that was one of the reasons why because it gives you an opportunity to play these do-or-die games. I love playing in them because it prepares you for where you want to be at nationals."