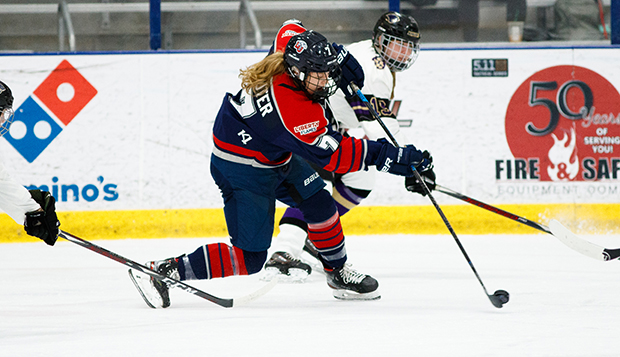 Liberty University's ACHA Division I women's hockey team, ranked No. 1 in the nation, opened play in the inaugural Women's Midwest Collegiate Hockey League tournament with a 3-0 triumph over McKendree, Saturday night at the FSI Sharktank in St. Louis.

The Lady Flames (25-2) outshot the Bearcats, 40-13, for the contest and senior goalie Nadia Rupoli recorded the 20th shutout of her career after missing the past few weeks due to injury and illness.

"Nadia got the shut out in goal and it was good to get her back in there back to full heath," Liberty Head Coach Chris Lowes said. "They had one 3-on-0 and one power play and Nadia stopped them both."

Liberty capitalized on an own goal in the final 10 seconds of the first period before freshman Val Manchak netted insurance goals 90 seconds into the second period and 90 seconds before the second intermission.

"All three goals were at even strength and we had one penalty each, so it was a very simple game with good five-on-five hockey," Lowes said. "They did a good job of limiting our chances and played a tight defensive zone."

An odd-man rush by junior forward Danica Polson on a near breakaway led to Liberty's first goal, when the rebound of her miss was banked into McKendree's net by its own defenseman on a failed clearing attempt during the ensuing scramble for the loose puck.

"That was a lucky bounce and must have been a little demoralizing for them to play a good period and give that up at the end of it, but we were happy to have it," Lowes said.

Manchak scored her first goal unassisted on a breakaway before finishing a 3-on-2 fast break off assists from her two linemates, freshman Yannick Truter and sophomore Grace Machholz.

The top-seeded Lady Flames await a first-ever meeting with No. 2-seeded and nationally ranked Minot State, a 1-0 winner over third-seeded and ranked Lindenwood-Belleville, in Sunday's 1:45 p.m. (EST) championship game.

"They're a good team and have had a great season," Lowes said. "We have matched up with a lot of similar opponents, but it will be fun to match up against one of only top-10 teams we haven' t played this year."

Lowes said the Lady Flames are eager to play for the first WMCHL crown before going on to compete for their third consecutive ACHA DI National Championships from March 25-29 in Frisco, Texas.

"It's one of our goals this year, and we are pretty eager to do that," he said. "At this point, all that matters for us is to continue to play well and win a title. It's going to have that (national championship) feel, but we have a lot of work to do to get back there in Dallas."

The game will be webcast live on Lindenwood-Belleville's website.