Liberty seeded No. 1 for first WMCHL tourney in St. Louis 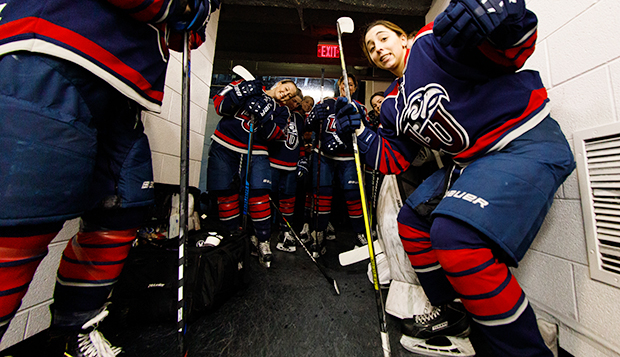 Liberty junior forward Shelby Bradford (right) and teammates gather in the tunnel at the LaHaye Ice Center prior to their last home series on Jan. 31. (Photos by Luke Bobbey)

Billed at No. 1 for all 11 ranking periods of the season to date, Liberty University's two-time defending ACHA Division I National Champion women's hockey team will travel to St. Louis on Friday to compete in the inaugural Women's Midwest Collegiate Hockey League (WMCHL) tournament at the FSI Sharktank.

"The league has been really successful," Liberty Head Coach Chris Lowes said. "We knew it was going to be good, but didn't know that all six teams would be among the top 10, including the top three. The talent this weekend is going to be as good as it will be for nationals."

The Lady Flames (24-2, 7-1 WMCHL) and No. 2 Minot State receive first-round byes to Saturday's 7 p.m. (EST) semifinals. As the top seed, Liberty will face the lowest remaining seeded team after McKendree plays Minnesota and Lindenwood-Belleville takes on Midland in Friday's first round. Sunday's championship game is set for 1:30 p.m. (EST).

All tournament games will be streamed live on Lindenwood-Belleville's website.

Only four WMCHL teams are currently qualified for the eight-team ACHA DI National Championships, set for March 25-29 in Frisco, Texas. No. 11 Colorado received a nationals autobid after winning the Women's Western Collegiate Hockey League (WWCHL) tournament, as will the winner of the WMCHL tournament, which will also factor into the final rankings used to determine the national field.

"It is still part of our goal to solidify the No. 1 seed," Lowes said. "We are trying to win a title and continue our progression. It's going to be a national playoff feel, a single-elimination tournament, and it will be quite a test."

Liberty's only conference loss this season game against Lindenwood-Belleville on Sept. 29 in a rematch of last year's national championship final. However, it has yet to face Minot State or Minnesota.

"We are balancing our conditioning and health issues right now, trying to find the right balance over the next few weeks to keep the girls fired up and going strong," Lowes said. "We've taken a next-man-up approach. We've done it all year and we've got the talent to do it." 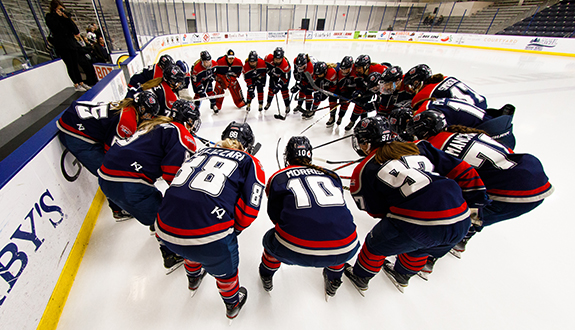