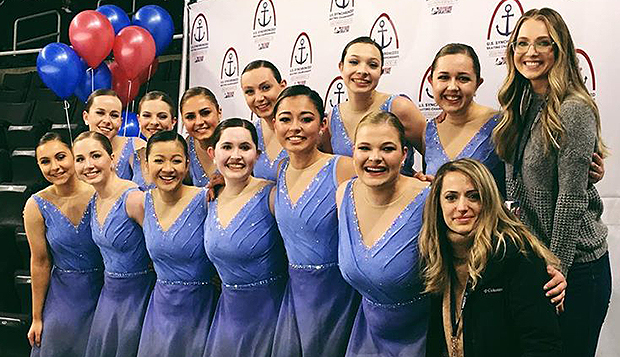 The team dedicated the program to those in their lives who have gone through various trials or difficulties in their lives, and those who have inspired others to continue fighting through those times.

"We were really happy for them because they have gone through a lot this season with different injuries," Liberty Assistant Coach Emily Hughes said. "They had the bare minimum of only 12 girls and a number of those had to battle through injuries of their own, so we were proud of them for pulling this off, to even compete at nationals. It definitely took a lot of work and it is always a challenge, but they were blessed to have a staff of athletic trainers who helped them to recover. We are definitely grateful for that."

Michigan (106.49) was the overall team champion followed by Adrian (97.35) and Miami (Ohio) University (92.81). Liberty finished ahead of Massachusetts (49.95) and Mirror Images (48.85), a team made up of skaters from various schools based in Fairport, N.Y. Complete results are available online.

"It was a clean skate, our first competition of the season where we didn't have a fall," Hughes said. "We spent more time on expression and overall interpretation of the music, making sure we were connecting our theme through our performance, with our facial expressions."

That resulted in an Interpretation of the Music score of 3.54, the team's highest to date.

Hughes and Head Coach Tatiana Payne also worked to fine-tune the program and improving the skaters' flexibility and fluidity in the weeks and months leading up to nationals and were able to get two elements called by the judges — the pivoting block and feature moves, which earned a score of 5.74.

"We still feel we can improve our technical score," Hughes said. "Now that the season is over, we are continuing to increase the difficulty of our elements. We definitely have the skill. We just need to keep practicing to bring that technical score up."

The Lady Flames will have an opportunity to perform the routine once more at the April 25 PraiseFest in the LaHaye Ice Center. That show, which will include performances from the figure skating team and "Learn To Skate" program participants, will have the theme "List My Song."

"Girls are picking songs that have inspired them through a joyful or a difficult time in skating," Hughes said.