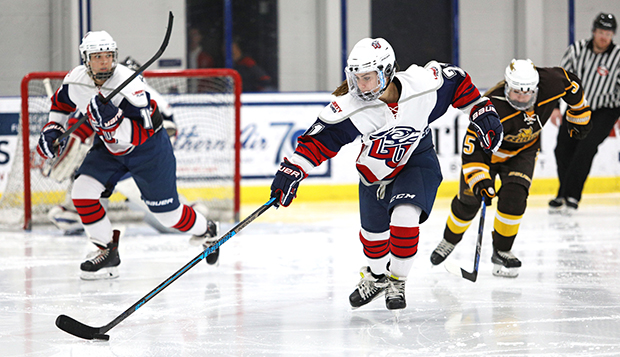 Liberty (17-5-1) outshot the Lakers, 72-51, but Mercyhurst goalie Alexandria Lapietra made 69 saves to secure the win, after beating Delaware in the semifinal round.

"It was definitely good competition," Leone said. "The size of their bench was about the same. We both had about 10 players and one goalie available."

Junior forward Brittany Hegele, the Lady Flames' all-time-leading scorer in DII women's hockey history, netted three of her team's four goals against the Midshipwomen and two of three against Mercyhurst, a team Liberty beat 3-2 at home and 2-1 at Mercyhurst this past fall.

In a championship game that was tied at 1, 2, and 3, sophomore forward Paige Arnosti gave Liberty the first of its three leads with an unassisted goal midway through the second period. Hegele lifted the Lady Flames to a 2-1 advantage at the 5:13 mark before putting them on top, 3-2, by finishing an assist from Arnosti just 2:38 into the third period.

But after Mercyhurst's Hayley Vandepol tied the game back up with 2:08 remaining in regulation, Lakers forward Bridget Bork completed her hat trick on a controversial game-winning power-play goal just 52 seconds into the second 10-minute overtime period.

Leone said it appeared that Liberty sophomore goalie Madeleine Snook saved Bork's shot, but the officials ruled that the puck crossed the goal line before she smothered it.

In the semifinal game against Navy, which had eliminated host Cal-Penn in the play-in game, Hegele scored Liberty's first three goals, the first two off assists from sophomore defenseman Delaney Adams and third set up by Arnosti. Sophomore forward Hope Stengler provided the Lady Flames a cushion with the only goal of the third period, finishing a feed from junior defenseman Alexis Early.

Liberty had beaten Navy three times in the regular season, 4-1 at home and by 3-0 and 2-0 scores in Annapolis, Md. In the rematch, the Lady Flames outshot the Midshipwomen, 39-29, and Snook made 27 saves to preserve the victory.

A season after winning its first CHE tournament but missing the ACHA DII National Championships, Liberty finished runner-up but is expected to make the national field for the second time in three seasons, and second time in program history.

"We were ranked No. 2 in the ACHA in the Southeast Region behind Rowan and No. 1 in the CHE," Leone said, noting that the top four teams in this Wednesday's final ACHA Southeast Region rankings qualify for the March 25-29 ACHA DII National Championships in Frisco, Texas. "Right now, we are waiting to see what order the rankings are and learn if we have a bid to nationals."