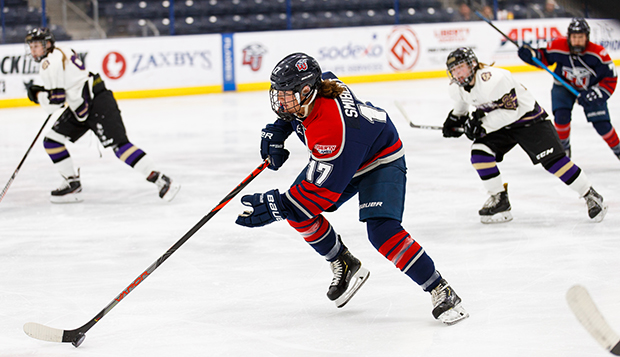 Senior forward Alex Smibert recorded a hat trick and Liberty University's ACHA Division I women's hockey team completed a sweep of the Washington Pride U19 team with a 9-0 annihilation on Sunday afternoon at the Rockville Ice Arena in Rockville, Md.

The Lady Flames humbled the Pride by outshooting their hosts, 49-19, and winning 59 percent of faceoffs in the contest. Liberty opened a 3-0 lead after the first period on goals by sophomore forward Grace Machholz, junior forward Shelby Bradford, and senior defenseman Deena Birney before Birney and Smibert scored in the second stanza to extend the advantage to 5-0.

Saturday's first game was completely different, tied at 1-1 after two periods. Though Liberty outshot the Pride, 46-16, it needed overtime to edge Washington, 2-1, with Polson scoring both goals for the Lady Flames.

Liberty (27-3, 22-2 and ranked first in ACHA play) avenged a 3-2 overtime loss to Washington on Sept. 8 at the LaHaye Ice Center. Before seeking to become the first team since Lindenwood to three-peat at the ACHA Division I National Championships, March 25-29 in Frisco, Texas, the Lady Flames will travel to St. Louis this Thursday to compete in the first Women's Midwest Collegiate Hockey League (WMCHL) tournament, featuring six teams ranked in the top 10.