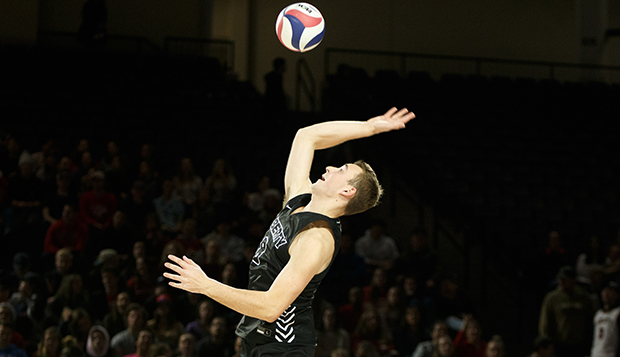 "I thought we executed our game plan pretty well," Flames Head Coach Kaleb VanDePerre said. "We blocked super well, especially early on, got a lot of hands up and were disciplined at the net. Setting our opposite hitters, Cody (Reinsma) and Josh (Knapp) had an advantage over the Randolph-Macon blockers and both of them hit above .500."

Knapp got Liberty out to a quick 2-0 lead in the first game with a stuff block. Later, junior outside hitter Sean Taggart followed a dink winner with a stuff block of his own for a 14-7 advantage before Knapp's kill from the right side extended it to 19-11.

Reinsma's cross-court kill got the Flames out to a 3-1 advantage in the third game before a dink winner and a kill by Morton expanded it to 6-1. Dowd put away a short set from Morton before Knapp posted two kills from the right side and Dowd's stuff block kept Liberty in front, 17-13. Knapp added two more winners before Morton kill set up Knapp's stuff block and Morton's final jump serve was not returned.

"There were a few times where we lost focus, but we came out strong early and finished strong," VanDePerre said, noting that a subdued crowd made it difficult at times to stay hyped up. "It was a good test of ‘Can we bring energy, be loud, and do all the things that successful championship teams do?' and 85 percent of the time we did."

Setter Chase Keith, a Division II call-up, joined Speelman in the Flames' 6-2 formation for the second and third games and finished with eight assists.

"Our team is more offensive and has a bigger block when we run a 6-2," VanDePerre said. "Chase did a good job defending and spreading the ball around, getting everyone involved."

Liberty will return to action on March 22, when it hosts the ECVA South Championship tournament at the LaHaye Multipurpose Center. Its Division II team will look to join the DI squad at the March 28-29 East Coast Championships at Maryland by winning its bracket or finishing ahead of Virginia Tech's B or C team.