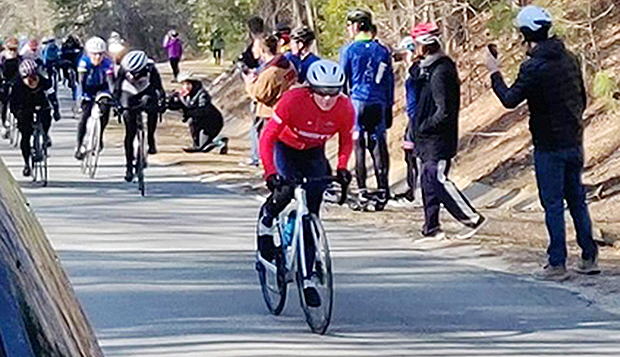 Senior Bethany Matsick used a breakaway sprint to pull away from the rest of the field in Saturday's 21-mile Collegiate C road race before making a late move to win Sunday's criterium. (Photos courtesy of Benjamin Cook)

Racing in a field of 10 Collegiate C competitors and 22 Category 3 and 4 open cyclists, Matsick pulled away to win the 21-mile road race through York River State Park by a comfortable distance. The next day, she made her move late in the 45-minute criterium around Todd Stadium, pulling away from the rest of her competitors and even lapping a few of them.

Head Coach Timo Budarz is impressed with Matsick's power and endurance on the bike after competing as a swimmer through her high school career. He managed to get her an immediate upgrade to compete in the Collegiate B division in this weekend's races hosted by North Carolina State and hopes for an upgrade to Category A in the near future.

Liberty also had two men's race winners. Senior Todd Yoder won the Collegiate B road race handily after a breakaway finish and could gain enough points to move up to race at the A level after this weekend.

Freshman Benjamin Cook won the men's Collegiate C criterium with a flying finish on the last lap, surprising the rest of the field by taking an inside line on the back straight away. He led into the final left turn and held off the field to the finish line.

"Ben actually crashed in that race but got a free lap," Budarz said. "He finished with blood flowing from his knee down to his shin that he said gave him the adrenaline he needed to win."

Freshman Danny Logan finished sixth in Sunday's criterium race despite crashing. He was followed by senior Andrew Mann in seventh and junior Gunnar Ingram 13th after a blown tire forced him off course.

"They were overly anxious in their very first race," Budarz said, noting that they got out too fast and weren't able to draft off of their competitors. "There are a lot of race tactics they need to learn to employ, but they show plenty of promise."

Graduate student Freddie Shashaty, Liberty's only current Category A rider, placed ninth in the 60-mile Collegiate A road race after experiencing mechanical troubles that put him behind the rest of the field and he lost more time and energy than he could make up.

In the Collegiate B criterium, which was combined with Open Category 3, Yoder finished fourth out of four collegiate cyclists.

"He suffered in the criterium exactly what other guys suffered in the road race, too much enthusiasm and not enough race tactics," Budarz said. "Life is great at teaching lessons. He won't do that again."

Shashaty was then joined by Budarz in the combined Collegiate A and Open Category 1-2-3 race, finishing fifth out of 12 collegiate starters.

"It was a brutal pace," said Budarz, who placed sixth overall, only a few bike lengths behind four professional cyclists and the reigning collegiate national champion. "There were a bunch of pros there and it was fast."

Only 14 of 22 open category riders and three of 14 collegiate racers that started Sunday's criterium finished it. Shashaty experienced mechanical issues, which ended his race 10 laps into the 50-lap event.

"It was a race of attrition," said Budarz, who reached over 40 mph on one stretch. "To me, it was a blast, (but) it felt like throwing punches on the bike for an hour. Criterium racing really tests your willingness to suffer. It was attack after attack after attack."

After this weekend's races at NC State, which will feature riders from the ACCC as well as the Southeast Collegiate Cycling Conference (SCCC), the Flames and Lady Flames will compete at Virginia Tech (March 21-22), the Naval Academy (March 28-29), which won the Williamsburg races, Appalachian State (April 4-5), and Maryland, for April 18-19 ACCC Championships. Budarz will then take his Category A riders to Augusta, Ga., for the May 8-10 USA Cycling Collegiate National Championships.