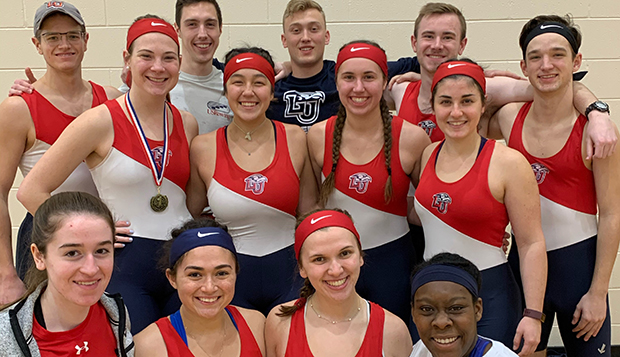 The Flames and Lady Flames sent 13 members of their crew team to Sunday's event held on indoor rowing machines.

"It was a good event, a nice opportunity to get in a competitive atmosphere with other teams on the rowing machines to see where we stack up, as well as focus on personal performance to see where their training has taken them," Liberty Head Coach Debbie Prowse said. "It was a good assessment to see if our conditioning and weight training is contributing to their performance, power-wise. We had a really good day with 11 out of the 13 rowers clocking PRs."

In the collegiate women's novice open weight race, sophomore Morgan Schaible finished third in 7:38.4 and Mikayla Burton seventh in 8:02.4 out of 25 rowers.

Prowse is eager to see how her rowers perform on the open water, starting this week in practice.

"We have been training indoors five days per week, combining workouts on indoor rowing machines, stationary cycling, and swimming workouts along with weight lifting on Tuesdays and Thursdays in preparation for our spring 2K season," she said. "We have definitely shown improvement since winter break."

Rowers will be training four days per week out of Liberty's boathouse at Mitchell's Point Marina, where they will endure two-a-day workouts over spring break from March 16-21. That will help them gear up for their first regatta, the April 4 Waterfield Cup hosted by Virginia Tech in Dublin, Va., featuring teams from around the state.