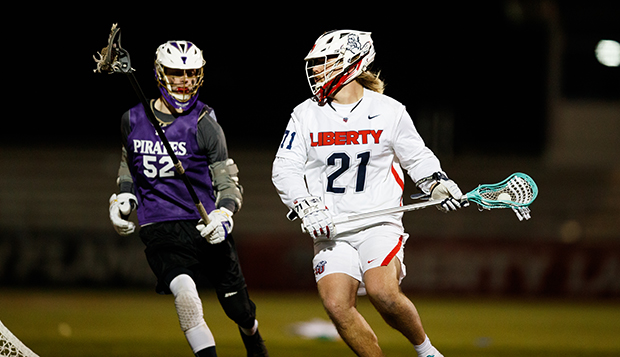 Miller, the younger brother of the Flames' all-time leading scorer, Ryan Miller ('16), scored four goals and distributed six assists to spark the Flames in an 18-7 rout of the Pirates (0-2) in front of a College For A Weekend (CFAW) crowd at the Liberty Lacrosse Fields.

"We didn't get off to the quick start like we wanted to," McQuillan said. "I wish we would have started the way we finished, but overall, for our first game at home and as cold as it is, it's always nice being able to pull out a win."

Nichols stretched Liberty's lead to 7-3 with 9.1 seconds left in the first half by submarining a shot from the left side of the box inside the lower right post.

"C.J. kind of picked up where he left off from last year," McQuillan said. "He's always a guy that we can rely on. We think we've got a lot of those guys, but C.J.'s definitely been a consistent player for us to be able to deliver in those moments."

Senior middie Carter Elliott stretched Liberty's lead to 10 goals by rifling his only score from the top of the box inside the upper left post.

"It was nice to get out here in front of our home crowd," Elliot said. "We have a lot of returners on our offensive side, guys like Caleb Britton and Derrick Esh who I've played with since my freshman year, so it was nice to play around with them again."

Senior goalie Ryan Reynolds made 12 saves (63.2 percent) to preserve the win for Liberty, which outshot ECU, 42-31.

"Ryan played excellent in net," McQuillan said. "I definitely underestimated (ECU). They had some good shooters, they were really athletic, really physical on the ground balls, and they gave us a lot more of a game than I anticipated. We gave them a few opportunities in man-ups and broke down in transition a few times which gave them some opportunities as well. Credit to them for capitalizing."

But the Flames kept the Pirates attack at bay by controlling the midfield play.

"Tonight, we got in three offensive middie lines and were able to rotate them pretty well," McQuillan said. "I would have liked to have seen some more time for our second and third lines, but we got rolling with our No. 1 middle line for a while and kind of wanted to play the hot hand, so we hit our stride in the third quarter. … Overall, we got to use a lot of our depth, and we are definitely optimistic going into Sunday against Michigan State."

After eliminating the 2018 MCLA national champion Spartans in the first round of last year's tournament in Salt Lake City, the sixth-ranked Flames will look to stretch their winning streak to four against 12th-ranked MSU when they meet on Sunday at noon at the Liberty Lacrosse Fields.

"Michigan State is going to be a lot of individual matchups, a lot of one-on-ones," Elliott said. "We have a strong midfield line that is able to dodge wherever and be a threat, and that's going to be really important against Michigan State."

"It's going to take four quarters of the way we played the fourth quarter tonight," McQuillan added. "I don't think Michigan State's a team that's going to give us a lot of breaks. They're going to capitalize on mistakes, and when we're slow or lazy or undisciplined like we were in a lot of moments tonight, they're going to make us pay for that. I think our guys know that, and they're going to be ready. Hopefully, we can build off the success and have some confidence going into Sunday. We're looking forward to it."