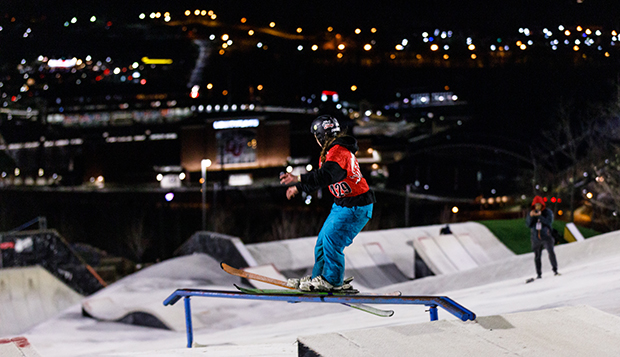 The Flames and Lady Flames swept seven of the eight team competitions — all but the women's snowboard Big Air event — many in dominating fashion. The first USCSA events held at Snowflex since 2017 attracted student-athletes from JMU, Virginia, Western Carolina, and Piedmont Virginia Community College.

"It was a really awesome opportunity for us to be able to host the other teams and to showcase our facility on Liberty's mountain, which is very unique," Liberty Head Coach Isaac Gibson said. "Having a home contest on our slope allowed our skiers and riders to be confident in the tricks they were doing."

In Saturday's Rail Jam, Liberty's snowboarders edged UVA, 13-14, followed by North Carolina State (31) and JMU (32). Coleen Leja (63.33) demonstrated some advanced maneuvers on the rail features to narrowly beat fellow Lady Flames freshman Emory Orlando (63) for first place, but injured herself on a 180-degree spin coming off a rail on her last run, which kept her out of Sunday's Big Air event.

"She was able to put down some tricks that were pretty impressive and allowed her to stand above the competition," Gibson said of Keeran.

The Flames' skiers also dominated the Rail Jam, racking up the second through seventh positions to total 9 points and separate themselves from Virginia (25), PVCC (31), and WCU (35). Luke Linker came in second with his score of 74, less than a point behind PVCC's Corey Okst (74.67), followed by seniors Christopher Yablonski (72) and John Hunt (71), junior Elijah Haita (60.67), and freshman Maxwell Ozanne (60.33).

Liberty's skiers and snowboarders are training at Wintergreen Resort in preparation for the Feb. 29 USCSA Regional Championships at Blue Mountain (Pa.) Resort, where they will compete in slopestyle. That will serve as a qualifier for the March 10-14 USCSA National Championships at Lake Placid, N.Y.

This Saturday, in conjunction with College For A Weekend (CFAW), Liberty will host a DeMoss Rail Jam on the steps of DeMoss Hall, a non-USCSA event open to anyone with prize money involved.

The steps will be covered with padded Snowflex and if temperatures are cool enough, snow from the LaHaye Ice Center will be used to pad the landing area, which will also be covered with turf. 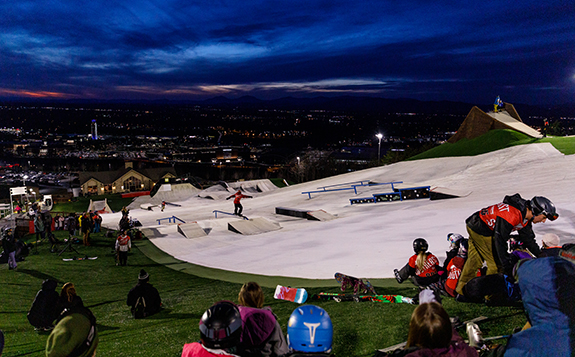